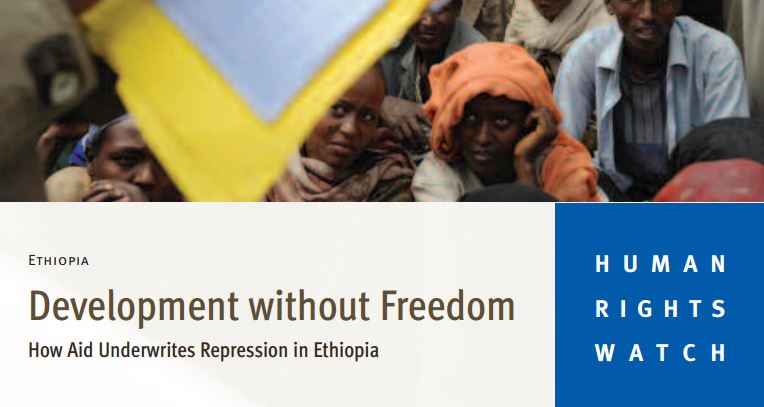 The report concludes that the Ethiopian population pays a heavy price for this approach to development. Accordingly, it draws the following recommendations:

Ethiopia is one of the poorest countries in the world. Half of Ethiopia’s 85 million people live
below the poverty line, and 10 to 20 percent rely on food aid every year. A large percentage of the
population needs government assistance in the form of food, seeds, fertilizer, and cash support.

Ethiopia is also one of the world’s largest recipients of foreign development aid. It receives
approximately US$3 billion in funds annually—more than a third of the country’s annual
budget—from external donors, including the World Bank, the United States, the European
Commission, the United Kingdom, Germany, the Netherlands, Canada, and Japan. Indeed,
Ethiopia is today the world’s second-largest recipient of total external assistance, after
Indonesia and excluding wartime Iraq and Afghanistan.

Led by the ruling Ethiopian People’s Revolutionary Democratic Front (EPRDF), the
government has used donor-supported programs, salaries, and training opportunities as
political weapons to control the population, punish dissent, and undermine political
opponents—both real and perceived. Local officials deny these people access to seeds and
fertilizer, agricultural land, credit, food aid, and other resources for development.
Such politicization has a direct impact on the livelihoods of people for whom access to
agricultural inputs is a matter of survival. It also contributes to a broader climate of fear,
sending a potent message that basic survival depends on political loyalty to the state and
the ruling party. In a meeting with Human Rights Watch in December 2009, Ethiopian Prime
Minister Meles Zenawi denied that there was a policy of using government services to
discriminate against the opposition and punish dissent. Civil servants who were interviewed
separately by Human Rights Watch contradicted him.

Ethiopia’s foreign donors are aware of this discrimination, but have done little to address
the problem or tackle their own role in underwriting government repression. As a result,
Ethiopia presents a case study of contradiction in aid policy. Donors acknowledge that aid is
most effective when defined by accountability and transparency.