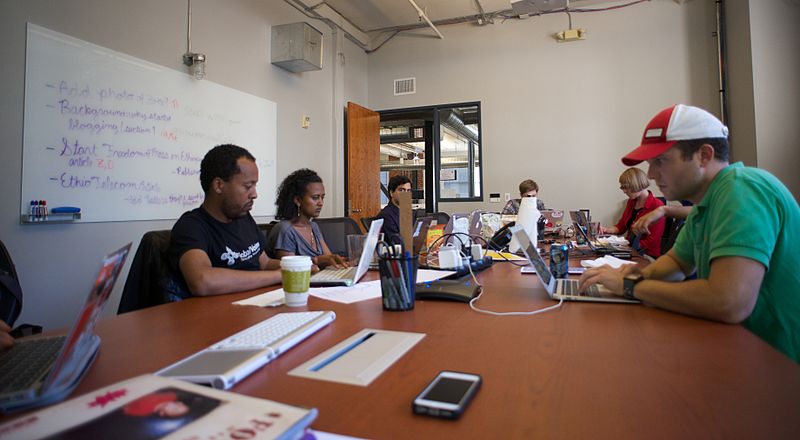 Across the globe, journalists and activists are in jail for doing the kind of work we do everyday here at EFF—advocating for free speech and privacy. Last April, for instance, the Ethiopian government arrested six members of the Zone 9 bloggers network and three other journalists.  All now face terrorism charges for blogging about free speech and online surveillance and for using free digital security software.

We wanted to raise awareness and educate people about the case in a way that would be maximally impactful, so we decided to spend a day editing Wikipedia to improve the entries relating to the Zone 9 Bloggers’ case. Here’s what happened.

At a recent Techno-Activism Third Mondays event (TA3M), a weekly tech-activist gathering in the Bay Area, one of the Zone 9 bloggers, Endalkachew Chala—who is in the U.S. finishing his Ph.D. and who worked with EFF this past summer as a policy fellow—gave a presentation about his imprisoned colleagues and the free speech climate and media laws of Ethiopia.

We’ve been following the case closely, largely thanks to Endalkachew’s Trial Tracker Blog, where he has been posting translated court documents and blogging in English about the case’s progress. And as with any story of injustice, the more we learned, the more we wanted to help.

When dealing with a  case in another country, there’s often not much that a small group of concerned Internet users can do to help, but one thing that we can always strive to do is raise awareness. But how? More blogging? Social media campaigns? We wanted to raise awareness in a way that would be lasting and reach the most people, including those outside of our networks.

Our idea: a Wikipedia editing mini-marathon aimed at improving the articles about the Zone 9 Bloggers and Ethiopia’s Internet and free speech policies. Our hope wasn’t to get people to take a particular action or a particular position on the case.  Rather, we wanted Internet users to learn about the political and human rights situation in Ethiopia.

Earlier in the summer, Niki Korth, a video artist and digital rights activist who is a regular at TA3M, and Elliot Harmon, communications manager at Creative Commons, organized a Wikipedia edit-a-thon for imprisoned Syrian software developer, thought leader, and Internet activist Bassel Kharrabil, who has been in jail in Syria without charge since 2012.

A Wikipedia Edit-a-thon is an event where users all over the world gather in person and online to improve the coverage of particular subject areas on Wikipedia.

When an event, theory, object, or individual doesn’t have a strong Wikipedia presence, it’s harder for to learn about it. Wikipedia helps us to gain context, research, and quickly get up to speed on even the most obscure topics.

Before the Bassel Edit-a-thon, the Wikipedia page for the imprisoned Internet activist was slim and in need of significant updates. Now any journalist, student, or curious mind can go to Bassel’s Wikipedia page and learn about his work, his detention, and the international response surrounding his case. “Publicly and freely providing neutral, accurate, information about someone’s cause is an ideal way to support them,” said Korth, one of the event organizers.

Pages relating to Bassel’s case and work were also created and edited. For instance, there is now a Women in Syria page (which needs more editing!), and significant improvements were made to the article on the knowledge commons.

We put out the announcement and spread the word, and on the following Sunday, roughly a dozen people met at the Wikimedia HQ in San Francisco to get to work. After about four hours of writing and researching, we had not only tripled the size of the Zone 9 Bloggers article, but we had also added three sections to the Human Rights in Ethiopia entry: Freedom of the Press, Freedom of Association, and Electronic Communications.

Editors also greatly expanded the Internet in Ethiopia article to include sections on censorship and surveillance, updated the Ethio Telecom article about the country’s only ISP (which happens to be owned by the government), and updated the article on spyware manufacturer FinFisher to include Ethiopia’s use of the spyware. Editors also created a new page for Befeqadu Hailu, one of the more famous Zone 9 Bloggers currently in prison.

The Zone 9 Bloggers edit-a-thon was quite easy to put together, and we encourage others to organize more edit-a-thons all over the world. Wikimeida has assembled a how-to guide to help you get started.

The point of the edit-a-thon isn’t to advocate or campaign, but rather to make it easier to learn. Contributing to Wikipedia is an important way to create freely licensed educational content and share it widely.

So contribute to Wikipedia, find stories that haven’t been told, and create an entry. Together, we can promote free speech and access to information. But to do so, we need to research, write, and share. Wikipedia is a great place to start.