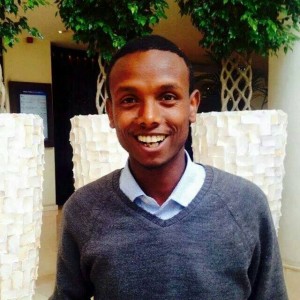 This testimony was written by blogger and human rights advocate Befeqadu Hailu in late August 2014. A founding member of the Zone9 blogging collective and a Global Voices community member, he was arrested and imprisoned on April 25, 2014 along with five fellow members of Zone9 and three journalist colleagues. On July 17, 2014, all nine detainees were charged under the country’s penal code and the Terrorism Proclamation of 2009. Befeqadu mentions in his text the names of several of his fellow detainees including Abel, Mahlet, and Natnael. All are members of the Zone9 collective.

This is the first of two installments of an abridged version of Befeqadu’s testimony. It was translated from Amharic to English by Endalk Chala and edited for clarity and context by Ellery Roberts Biddle. The full, unabridged testimony is available in PDF form here.

“So, what do you think is your crime?”

My interrogator posed this question after forcing me to recount my work as an activist and progressive blogger. Soon after the interrogation, when my captors reunited me with my blogger friends, we realized that we were all asked this same question: “So what do you think is your crime?”

The question is intriguing. It sheds light on our innocence, on our refusal to acknowledge whatever crimes our captors suspect us of committing. Yes, they probed us severely, but each session ended with same question. The investigation was not meant to prove or disprove our offenses. It was meant simply to make us plead guilty.

After two years of writing and working to engage citizens in political debate, we have been apprehended and investigated. Blame is being laid upon us for committing criminal acts, for supposedly being members and “accepting the missions” of [opposition political parties] Ginbot7/May 15 and OLF. [1]

The next step is “due process” and our prosecution, but I believe there are still questions to be answered. How did we get here? What was our interrogation like? Are we really members of Ginbot7/May15?  If not, why have they arrested us?  Will they release us soon?

No matter what, boundaries exist in this country. People who write about Ethiopia’s political reality will face the threat of incarceration as long as they live here.

We believe that everyone who experiences this reality, dreading the consequences of expressing their views, lives in the outer ring of the prison – the nation itself. That is why we call our blog Zone9. [2]

Zone9 was merely two weeks old when the government made our collective blog inaccessible in Ethiopia in 2012. Despite the blockage, we continued to write, but we knew that the fate of our blocked blogs could be our own. We knew we could end up being arrested.

In the days and weeks leading up to our incarceration in April 2014, government security agents threatened us with imminent arrest, but we were still shaken by what happened to us. The six local members of the blogging collective and our three journalist allies were arrested and detained. With the exception of one of the journalists (Asmamaw Hailegiorgis of Addis Guday newspaper) we were arrested on Friday April 25 at about 11:00 pm and taken from our respective locations. Asmamaw was arrested the next morning. By the time we were seized and taken to the detention center, the search “warrant” that authorized our arrest was well over its time limit, according to Ethiopian law. The unlawful intrusion on our rights began here. Without delay, we became the victims of many violations of Ethiopian law by the authorities.

The idea of setting a foot in the compound of the ill-famed Maekelawi detention center gives a cold shiver to anyone who knows its history. But my sheer optimism and trust that the brutal and inhumane treatment of people was a distant memory saved me from trembling as I was escorted into the compound. The same was true of my friends, I suppose. What is more, we had nothing to be scared of, because we are neither undercover agents nor members of armed forces. We are just writers.

But as soon as I arrived at Maekelawi, detainees informed me that I had been placed in one of the notorious sections of the detention center, known as “Siberia”. In less than a week, I felt like I was living in the middle of an account from the 2013 Human Rights Watch report entitled “They Want a Confession”. [3]

This is the first of two installments of an abridged version of Befeqadu’s testimony. It was translated from Amharic to English by Endalk Chala and edited for clarity and context byEllery Roberts Biddle. The full, unabridged testimony is available in PDF form here.

[1] Ginbot7 and the Oromo Liberation Front (OLF) are opposition political parties based in the United States. Both have been accused of terrorism by the Ethiopian government.

[2] “Addis Ababa’s Kality prison is divided into eight different zones, the last of which — Zone Eight — is dedicated to journalists, human right activists and dissidents. When we came together, we decided to create a blog for the proverbial prison in which all Ethiopians live: this is Zone Nine.” From “Six Members of Blogging Collective Arrested in Ethiopia,” by Endalk Chala.