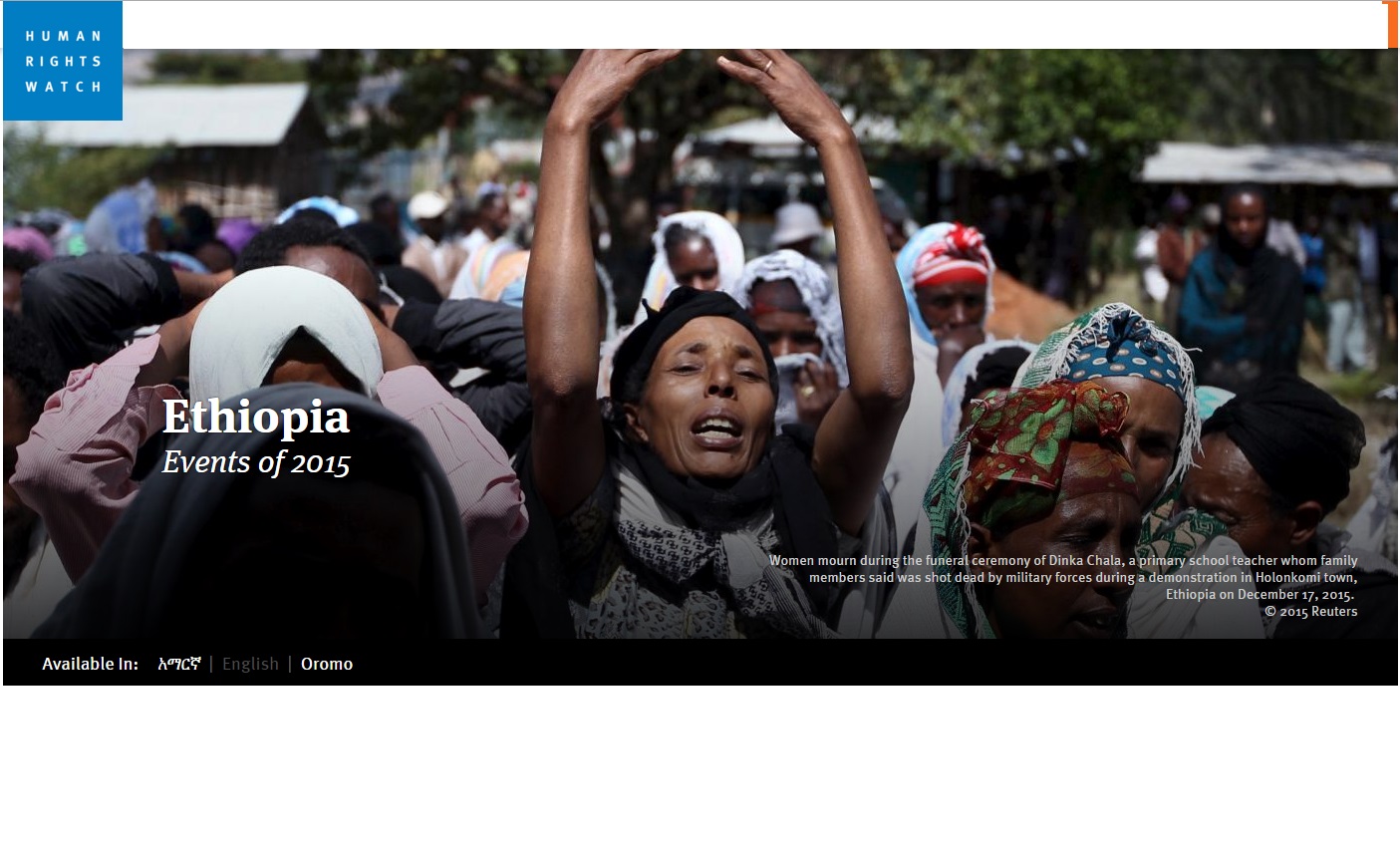 In Ethiopia in 2015 there were continuing government crackdowns on opposition political party members, journalists, and peaceful protesters, many of whom experienced harassment, arbitrary arrest, and politically motivated prosecutions.

The Ethiopian People’s Revolutionary Democratic Front (EPRDF), the ruling party coalition, won all 547 parliamentary seats in the May elections, due in part to the lack of space for critical or dissenting voices. Despite a few high-profile prisoner releases ahead of the June visit of United States President Barack Obama, there was no progress on fundamental reforms of the deeply repressive laws and policies constricting Ethiopian civil society organizations and media.

Opposition parties reported that government officials regularly blocked their attempts to hold protests and rallies in the run-up to the election by denying permits, arresting organizers, and confiscating equipment.

These restrictions, alongside the absence of independent media and civil society, meant there was little opportunity for dissenting voices to be heard or meaningful political debate on key issues ahead of the elections.

Eighteen individuals identified as leaders of the Muslim protest movement that swept across Ethiopia from 2012-2014 were convicted in July under the Anti-Terrorism Proclamation and sentenced in August to between 7 and 22 years each after closed, flawed trials. Authorities detained them in July 2012 when some Muslim communities were protesting against perceived government interference in their religious affairs.

An unknown number of ethnic Oromo students continued to be detained, many without charge, after protests throughout Oromia in April and May 2014 against the planned expansion of Addis Ababa’s municipal boundary into Oromia. Security personnel used excessive and at times lethal force, including live ammunition, against protesters in several cities, killing at least several dozen protesters, and arrested hundreds.

There have been no investigations by Ethiopian authorities into the deaths and the use of unlawful force. Those released said they were tortured or otherwise ill-treated in detention. Ethnic Oromos make up approximately 45 percent of Ethiopia’s population and are often arbitrarily arrested and accused of belonging to the banned Oromo Liberation Front (OLF).

Freedom of Expression and Association

Media remained under government stranglehold, with many journalists having to choose between self-censorship, harassment and arrest, or exile. At least 60 journalists have fled into exile since 2010. Tactics used to restrict independent media included targeting publishers, printing presses, and distributors.

In June, journalist Reeyot Alemu and five other journalists and bloggers from the Zone 9 blogging collective were released from prison ahead of President Obama’s visit to Ethiopia, On October 16, the remaining four imprisoned Zone 9 bloggers were acquitted of terrorism charges after 39 hearings and 539 days in detention. A fifth charged in absentia was also acquitted. Many other journalists, protesters, and other political opponents continued to be prosecuted under the Anti-Terrorism Proclamation, and many journalists including Eskinder Nega and Woubshet Taye remain in prison.The 2009 Charities and Societies Proclamation (CSO law) continues to severely curtail the ability of independent nongovernmental organizations to work on human rights. The law bars work on human rights, good governance, conflict resolution, and advocacy on the rights of women, children, and people with disabilities if organizations receive more than 10 percent of their funds from foreign sources.The government regularly monitors and records telephone calls of family members and friends of suspected opposition members and intercepts digital communications with highly intrusive spyware. Leaked emails from Milan-based Hacking Team, which sold spyware to the Ethiopian government, reveal that despite warnings of the risk of Ethiopia misusing their spyware, they issued a temporary license to Ethiopia while they began negotiations in April on a new contract worth at least US$700,000.

Ethiopian security personnel frequently tortured and otherwise ill-treated political detainees held in both official and secret detention centers to give confessions or provide information. At its UN Universal Periodic Review in 2014, Ethiopia accepted a recommendation to “adopt measures which guarantee the non-occurrence of cases of torture and ill-treatment in places of detention,” but there is little indication that security personnel are being investigated or punished for carrying out these abuses.

The Liyu police, a Somali Regional State paramilitary police force without a clear legal mandate, continued to commit serious human rights abuses in their ongoing conflict with the Ogaden National Liberation Front (ONLF) in Ethiopia’s Somali Region, with reports of extrajudicial killings, arbitrary detention, and violence against civilians who are accused of supporting or being sympathetic to the ONLF.

Andargachew Tsige, a United Kingdom citizen and secretary-general of the Ginbot 7 organization, a group banned for advocating armed overthrow of the government, remains in detention in Ethiopia after his unlawful 2014 deportation to Ethiopia from Yemen while in transit. He had twice been sentenced to death in absentia for his involvement with Ginbot 7. UK consular officials visited Andargachew only three times, amid growing concerns about his mistreatment in detention. In April, the UN Working Group on Arbitrary Detention called on Ethiopia to release and compensate Andargachew.

Some donors, including UK’s Department for International Development (DFID) and the World Bank, rechanneled funding from the problematic Protection of Basic Services (PBS) program in 2015. PBS was associated with the abusive “villagization program,” a government effort to relocate 1.5 million rural people into permanent villages, ostensibly to improve their access to basic services. Some of the relocations in the first year of the program in Gambella region in 2011 were accompanied by violence, including beatings and arbitrary arrests, and insufficient consultation and compensation.

Some Gambella residents filed a complaint in 2013 to the World Bank’s Inspection Panel, the institution’s independent accountability mechanism, alleging that the bank violated its own policies on indigenous people and involuntary resettlement. The Inspection Panel identified major shortcomings in the PBS program in its November 2014 recommendations, although the World Bank Board largely rejected the findings in February. A translator who worked with the Inspection Panel in Gambella was arrested in March and charged under the Anti-Terrorism Proclamation in September 2015.

In February, in the course of a court hearing on a complaint by an Ethiopian farmer that the UK violated its partnership principles by supporting the PBS program, DFID announced that it was ending support to the PBS program. DFID cited concerns over Ethiopia’s civil and political rights record, including concerns related to “freedom of expression and electoral competition, and continued concerns about the accountability of security services.”

There are ongoing reports of forced displacement from development projects in different regions, often with minimal or no compensation and little in the way of prior consultation with affected, often indigenous, communities. Allegations have arisen from commercial and industrial projects associated with Addis Ababa’s expansion and the continued development of sugar plantations in the Lower Omo Valley, which involves clearing 245,000 hectares of land that is home to 200,000 indigenous people. Communities in Omo have seen their grazing land cleared and have lost access to the Omo River, which they relied on for crops. Individuals who questioned the development plans were arrested and harassed.

Violent incidents, both between different ethnic groups and between the government and ethnic groups, increased in 2015 partly due to the growing competition for grazing land and other resources. The reservoir behind the Gibe III dam began filling in January 2015, reducing the annual natural flood that replenished the agricultural lands along the banks of the Omo River.

Ethiopia enjoys strong support from foreign donors and most of its regional neighbors, based on its role as host of the African Union and strategic regional player, its contribution to UN peacekeeping, security and aid partnerships with Western countries, and its progress on development indicators. The African Union(AU)—the only international body that monitored the May elections—declared the elections “credible” despite the severe restrictions on opposition political parties, independent media, and civil society.

Ethiopia continued to facilitate negotiations between warring parties in South Sudan, and its troops maintained calm in the disputed Abyei Region. Ethiopia deploys troops inside Somalia as part of the AU mission, and in 2015 there were growing reports that abusive “Liyu police” forces were also deployed alongside the Ethiopian Defense Forces. Ethiopia continued to host hundreds of thousands of refugees from South Sudan, Somalia, and Eritrea.

Ethiopia is one of the largest recipients of donor aid in Africa, receiving almost $3 billion in 2015 despite allegations of human rights abuses associated with some development programs, including forced displacement in Gambella and the Omo Valley. There are no indications that donors have strengthened the monitoring and accountability provisions needed to ensure that their development aid does not contribute to or exacerbate human rights problems in Ethiopia.