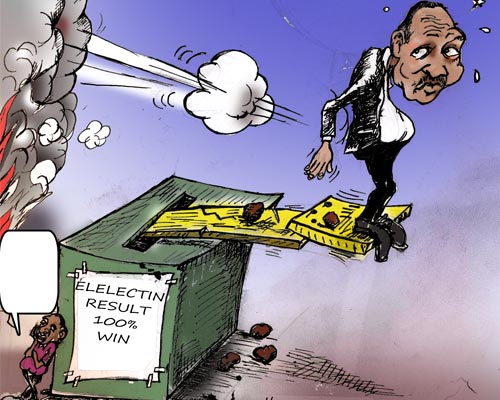 Oromia is in disorder. Protests and violence continue to rock a region of 35 million people. It has become impossible to predict the state of affairs there. What started as an objection to a Draft Integrated Master Plan between Addis Abeba and its surrounding localities has now blown up to become a popular protest against the legitimacy of regional authorities to rule with popular consent. It is now three months since the dynamics escalated to a worrisome state of volatility.

It should be disturbing to see no political road map tabled both from the regional authorities and those at the federal government to respond to the crisis in a sustainable manner. Not surprisingly, so far the response has come largely from law enforcement agencies, which apparently are becoming overstretched. The longer the volatility stays unaddressed, the more obvious the fear that the standoff will change course in due time. Last week, for instance, conflicts in Shashemene and smaller towns of Arsi Zone had alarming indications. Many people, including law enforcement officers, have died during the clashes. Never has there been such persistent resistance to authority in a given region in all the 25 years of rule by the EPRDF. There is a limit to the effectiveness of continued use of law enforcement, in the absence a lasting political response.

Of course, regional and federal authorities have not been sitting idly. In what seems to be a historic move, they responded to the protests by scrapping the Draft Integrated Master Plan. Their assumption was that the protests would recede. But they did not. Instead, they appear to have gained momentum.

As they see the protesting voices taking a new direction, way deviated from the issue of the Draft Master Plan, the authorities changed gear and reoriented their argument towards governance. Central to their thesis was that it all boils down to bad governance. Hence, they sent their veteran, experienced and influential cadres to the region to negotiate the terms of stabilization with the population. Little has come of this consultative exercise. Instead of discussing issues with the dissenters, they gathered the usual crowd, and were televised while praising their handling of the problem. But while the crowd they gathered denounced the unrests, and the alleged perpetrators, the protesters continue to swarm and block streets. Neither the revocation of the Draft Master Plan and the subsequent statements of regret, nor the “public discussions” has brought the saga to an end.

Whether they admit it or not, the ruling elite, especially the Oromo People Democratic Organisation (OPDO), a member of the ruling coalition that controls the 537-seat regional council, is faced with huge legitimacy deficit in the region. Only a year after it was proclaimed to have won a complete electoral victory, the OPDO is faced with waves of public protests questioning its legitimacy to rule. Whatever the manifestations are, the widespread, sustained and recurring protests are clear messages of a vote of no confidence by a rather young and restless segment of the population which is driven by a feeling of marginalization.

In light of the political spectrum in the nation, the conundrum OPDO is facing demonstrates limitations of the structural fundamentals of the political system the ruling EPRDFites have advocated for over two decades. By and large, the political space has increasingly narrowed, becoming uneven, non-competitive and unwelcoming. There should be little surprise to see a large section of the population disenchanted. They see legislative platforms both at regional and federal levels representing the views of one set of voters, contrary to the diversity of desires and interests in the Ethiopian society. Dissenting voices have been sidelined, exiled, jailed and neutralized. A culture of fear, patrimonialism and complacency has been incubated. Organised political ways of expressing differing opinions have been constricted.

Certainly, it all could not be attributed to the Revolutionary Democrats. Partly, the problem relates to opposition political parties that take comfort in infighting, opportunism and strategic ineptness among themselves. Even those who managed to grab historic opportunities to change the path of politics in the nation squandered and threw them away.

Yet, it would be naïve to dissociate it all from the politics of the ruling EPRDFites. After all, uncontested authority is what the ruling party sees as inherently essential to its “developmental” politics. With this comes the inclination to dominance, monopoly and suppression. These are breeding grounds for inequality and marginalization.

What is happening in Oromia, therefore, is the public way of challenging the structural setup of the political space as it currently exists. It is not a uni-dimensional problem and it cannot be justified in the older rhetorical ways. But it is a no brainer to discern that OPDO’s legitimacy to govern the region that constitutes 37.6pc of the population, is seriously challenged by the very public that entrusted the party to lead it less than a year ago.

Considering the fact that the ruling EPRDFites have tried to solve the problem through law enforcement processes, albeit with no success, there remains a logical option to stabilize the region through the constitutional electoral process. By this is meant a competitive snap election to be held in the region.

It is not unusual for countries, particularly those following parliamentary systems, to call snap elections – a form of elections called earlier than expected and not required by law. But it is used to take advantage of unique electoral opportunities or to decide pressing issues. There is indeed a political pressing issue lingering in the Oromia Regional State.

Surely, it could be argued that the protesting section of the population does not represent the entire voting public and hence, there is no crisis in legitimacy. Those perpetrating violence do not represent the core of disappointed protesters. Thus it can be deduced that the drivers are opportunists based at home and in the Diaspora, vying for popular association with every event of protest in the country. There is also a potent argument in that it is unjust to neutralize election results in which voters’ consent is expressed simply because an unknown number of people continue to protest.

But, looking at the way the protests evolved in the past three months, it is vividly clear that the numerical game has little power to hold water. Photographs and footage of the protesters circulated by the state and social media show that the age differential of people involved in the protests is varied. It is no more about students of secondary schools and higher education institutions. It constitutes members of the various strata of the population.

Thus, in a scenario where political and administrative means fail to bring governability, the ideal option is to allow democracy to define the way forward. If carrying out a snap election is thought an idea worth considering, it would not be the first to happen in this country. With the Coalition of Unity & Democracy (CUD) elected to rule Addis Abeba but unwilling to take office back in 2005, its governance was transferred to a caretaker administration before another election was held in two years. That gave the ruling EPRDF the confidence to reclaim the capital, despite shortfalls, and the process brought a modicum of continuity to the administration of Addis Abeba.

It is this same experience that can be exercised in Oromia. But a procedural election would not solve the problem. It has to be one that is competitive, involving all political agencies, based at home and abroad, that accepts the constitutional order without precondition and renounce violence as a means of political activism. For the OPDO, this may mean putting its proclaimed legitimacy to test. Since the exercise would bring the probability of losing it to its contenders, it may be uninteresting to its leaders. But it would not be worse than governing under continued challenges of its legitimacy on the streets, and live with the nightmare of recurring protests.

By way of undertaking a competitive snap election, the incumbent in Oromia could guide the public disappointment that has turned to deadly protest, towards a legal, constitutional and peaceful political process. A free, fair and competitive election would mean that the dissenting voices could find legal and peaceful platforms to make themselves heard, and their grievances attended. Hence, the playground would shift from deadly streets to a deliberative legislative council.

The risk of returning to the polls, at least in the eyes of the ruling party, may come from the precedent that a regional election would set. In the eyes of sceptical EPRDFites, this may also translate into rewarding protesters with disproportional recognition. But the perceived risks are less presumptive. If there is any precedent a snap election could set, it would be one that promotes the progression of democracy in the region and the entire nation. It would prove the predominance of democracy. Not least, it would draw the democratic line so boldly that it would be the most plausible guiding rule.

Such an election could bring landslide victory, partial victory or defeat to the incumbent. Whatever the case may be, the protesting public would get the opportunity to impart its feelings in the form of votes, hence placing confidence in a political agency that it favours. With this, democracy would get its way as a solution to the long overdue conundrum.

Needless to say, a constitutional approach to solving the problem in Oromia is way better than the alternatives, especially in view of sustainable peace. What it requires of the EPRDFites is the political courage to give democracy and the constitutional process its due.