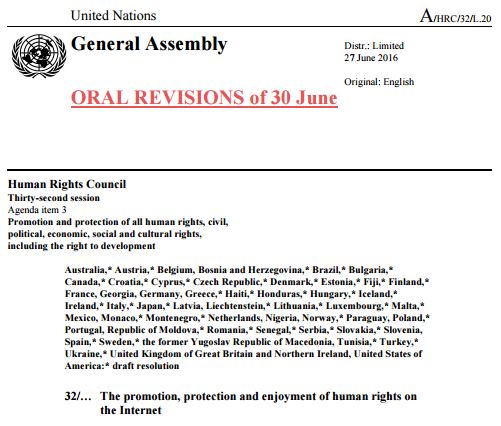 The United Nations Human Rights Council on Friday passed a resolution condemning countries that prevent or disrupt access to the internet.

The 47-member U.N. council has passed two resolutions since 2012 affirming people’s digital rights, but the section on internet blackouts appears to be a first.

The resolution passed by consensus “Condemns unequivocally measures to intentionally prevent or disrupt access to or dissemination of information online in violation of international human rights law and calls on all States to refrain from and cease such measure.”

The digital rights group Access Now has counted at least 15 internet shutdowns around the globe in 2015, and 20 in the first half of this year.

That includes the recent reported throttling of social media sites in Turkey following the terror attack on an Istanbul airport. Others have recently been reported in Bahrain and Algeria.

“Shutdowns harm everyone and allow human rights crackdowns to happen in the dark, with impunity,” said Access Now’s Deji Olukotun.

“Citizens can’t participate fully in democratic discourse during elections. The Human Rights Council’s principled stance is a crucial step in telling the world that shutdowns need to stop.”

The group pointed to a number of countries that attempted to “water down the text.”

The resolution is nonbinding. And in the past, experts have said these type of documents are primarily useful for public pressure.

The resolution also condemns violence or intimidation against people for “exercising their human rights and fundamental freedoms on the internet.” And it calls on countries to address security concerns online, including privacy.

As with past resolutions, the four-page document reaffirms that “the same rights that people have offline must also be protected online, in particular freedom of expression.”

It also calls on countries to help bridge the digital and gender divide, and to promote access for people with disabilities.