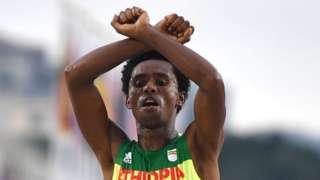 An Olympic marathon runner from Ethiopia staged a daring protest against his home government when he crossed the line in Rio on Sunday.

As he took the silver medal, Feyisa Lilesa crossed his arms above – a gesture made by the Oromo people who have suffered brutal police crackdowns.

Lilesa is from Oromia, home to most of Ethiopia’s 35 million Oromo people.

He repeated the protest gesture later at a press conference, saying his life would be in danger if he returned home.

“The Ethiopian government is killing my people so I stand with all protests anywhere as Oromo is my tribe. My relatives are in prison and if they talk about democratic rights they are killed. I raised my hands to support with the Oromo protest.”

The marathon runner said that he might be killed if he returned.

“If not kill me, they will put me in prison,” he said. “I have not decided yet, but maybe I will move to another country.”

Asked if he was worried about being sanctioned by the International Olympic Committee (IOC), he said: “I cannot do anything about that. This was my feeling. I have a big problem in my country, it is very dangerous to make protest in my country.”

Rule 50 of the Olympic charter bans political displays or protests and the IOC say they are gathering information about the case.

The American duo of Tommie Smith and John Carlos were famously expelled from the 1968 Summer Games after the pair flashed the black power salute on the medal stand.

There has been a wave of protests in Ethiopia in recent months over a series of frustrations, including attempts by the governments to reallocate land in the Oromia and Amhara regions.

After the Oromos, who make up around a third of the population, began protests in November the plan to expand the boundaries of the capital, Addis Ababa, was dropped.

But the demonstrations exposed some underlying issues about how the community feels excluded from the country’s political process and the economic development.

New York-based Human Rights Watch says that more than 400 people were killed in clashes with the security forces in Oromia, although the government disputes this figure.