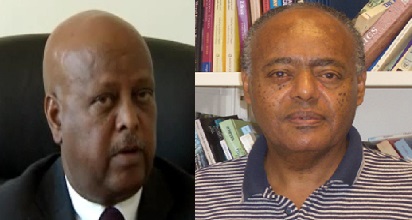 General Tsadkan Gebretensae’s piece on Ethiopia’s current political challenges. triggered heated discussion on social media and elsewhere on the internet. One of those reactions is Prof. Messay Kebede’s review.

I would like to thank you for taking your time not only to read but write your views on the basis of the piece I wrote. Again, I thank you for your kind words and encouraging me to dig deep into the roots of the problems our country is in.

The purpose of this short note is to acknowledge that I have seen and read your comments, and would like to say some few things to clarify my point of view.

1. With regard to how I see the situation in our country now and my intentions, you have clearly captured it, when you say “the stake is non-other than the survival of Ethiopia……”. The solution “implementation of Democracy……on the verdict of the people”. This is right.

2. Yes, I have said, and characterized the struggle of the people of Tigray led by the TPLF, as basically democratic and revolutionary, even though I did not say “solid deeply engrained tradition of democratic methods ……”. I think any popular armed struggle in a country like ours; (economically agrarian, politically feudal society; with a long uninterrupted history of autocratic rule, no tradition of democracy); can’t produce the type of democracy you described. Nonetheless the issue that the people of Tigray fought for; under the leadership of the TPLF; was democratic (struggle for all democratic rights), and it was revolutionary; because we fought for a revolutionary change in Tigray and the whole of Ethiopia against a tyrannical regime. By the way, I would like to pose a question: what are the characteristics that one would measure against; whether a popular armed struggle was democratic or undemocratic?

3. The form of struggle, tactic to achieve the objective was, armed struggle. This necessitated some restrictions on democratic ways of managing organizational affairs. In addition to this, we claimed to be “Marxist Leninists”. We followed the Leninists organizational principles. There could be an argument on the issue whether the whole Marxist Leninist ideology and principles of organization are undemocratic or the other way around. This will be ideological and will not take us anywhere at this stage. Even with those limitations, (limitation that emanate from the society where the struggle was born, and the limitations that were necessary to effectively conduct the armed struggle); I believe the TPLF did well and followed democratic principles. This is why I say the TPLF was democratic and revolutionary. But it was not without defects and challenges. I believe; after the capture of state power, the limitations, that are pointed out above, the socio-economic situation of our country; with the democratic deficit we had during the armed struggle; coupled together allowed the gradual evolution and dominance of the undemocratic characteristics of the organization.

4. I don’t claim to know all the knowledge on the political economy of the Developmental state VS Neo liberal political economy. But from the limited readings of the issues, I know there is a huge tension between the need for intervention of the state in economic activities, and the requirement to have stable political environment for the implementation of long term projects undertaken by the state. For a sustained and effective intervention of the state in the economic affairs, political stability is a requirement. This could be achieved preferably by democratic means or by all other means including using coercive measures (if all other measures fail). For me; using coercive means is not acceptable. At the same time, we can’t leave the economy to market forces alone, hence we shall manage and control the role and involvement of the state in the economic affairs of the country, which means democratic governance. I think this is a huge dilemma for a country like ours (Economically backward, multiethnic), which is necessitated by our socio economic situation. Under such a situation the democratic governance; I think will help us navigate through towards the establishment of a sustainably developing economy, and building a democratic society. I would assume this process will take time and a huge effort to galvanize the support of the population. I think this is the lesser evil that we have to accept rather than attempt to go in a rush, and possibly ruin the whole thing.

5. You have criticized me for being naïve and utopian, and even indicated that I could be accused of trying to prolong the life of the TPLF. Your reason to throw all those accusations at me is, my focus at the current constitution as a basis to peacefully resolve the problems we are in. I don’t think I am what you said I am. On the other hand, I am pragmatic and realistic. I am trying to identify what could work based on the realities on the ground. I don’t see any other frame of reference, for the whole country to initiate peaceful; orderly; managed change, except on the basis of the current constitution. The other alternative I see is to fight and resolve our differences. I don’t take this as an option to discuss. If it comes it will come by itself and I think the final result will be mutual destruction. That is how I see it, hence the call to avert the other scenario that I discussed. With regard to the current constitution; as much as you don’t agree on article 39, I think many Ethiopians within the Oromos; the Tigrians, the afars, Southern nations and nationalities, the Somalis, and Amharas etc. will feel comfortable with the article in the constitution. Besides; this is the only document that has been accepted by the people of Ethiopia to serve as the basis for governing the country, though I know there is strong opposition to some of the provisions including the article mentioned as well. The same thing goes to other issues you raised. My point is we need to have this frame of reference to use as a basis for a peaceful change, even to change it at a later stage constitutionally.

6. I did not say or assume that “the foundation of the government is good but implementation is the problem”. In fact, I pointed out the problems in the government and the ruling party. I even went further and said the problem is systemic. That is why I suggested that those problems could not be solved by the ruling party alone. That is why I suggested that there shall be a structure where all political forces and the populace at large through various forms of organization, shall participate and reach consensus on the way forward including revising some of the laws and reorganize some of the institutions, especially those related to elections. The objective of which shall be; to enable; the creation of a level playing field for all political parties to compete freely and fairly in the coming election. Above all I think this process will be instrumental in the development of trust and confidence of the population in the integrity of the political system in general which is greatly lucking at present. It goes without saying that I see the ruling party as one of the main actors and part of the process.

7. I have noted your point where you say the constitution was meant not to be implemented by its architects, it was meant to cover up other intentions. I disagree with you. The issue here is: given your perception of the constitution, there is no room for constructive dialogue to resolve the problem we are in; peacefully. The option we will be left with as people will be to dig our trenches and fight, the result as I said earlier will be mutual destruction. Nobody will be a “winner” in such a violent undertaking. Even if by any chance there comes a “winner” political group, that could come in any form; those “liberators” will demand their share of power for another decade or two. The same cycle will continue again. I don’t think this is an option for our country.

8. I did not have the intension to go into deep theoretical discussions, which I see no practical results coming out of it at this time. My desire is to reach an agreement or consensus (whichever one choses) on the state of affairs in our country, and to look for realistic solutions pragmatically. In an effort to enlighten the general public I might have ventured into some theoretical arguments in my previous paper, the intension was to explain some issues. In this regard; in my opinion policy difference that emanate from ideological differences, like Neo liberal political thinking, versus what is now popularly known as critical thinking, or for that matter other political thinking; could not be resolved by political debates among scholars and political elites. Those long standing differences are resolved and ought to be resolved by the verdict of the electorate. It is clear that we have differences that emanate from our ideological orientation; those can only be resolved by the choice of the electorate in a free and fair election. At this stage what I would say is; let all of us commit to a free and fair election and accept the verdict of the electorate.