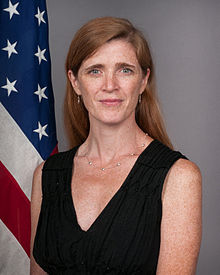 JUBA, South Sudan –  The U.S. ambassador to the United Nations says her country has raised “grave concerns” about what it calls excessive use of force against protesters in Ethiopia.

Ambassador Samantha Power spoke to reporters late Sunday as the U.N. Security Council ended a visit to South Sudan. It moves on to Ethiopia on Monday for talks with African Union officials.

Power called the violence in Ethiopia “extremely serious” and called for a transparent and independent investigation. She said the U.S. has asked the government to allow people to protest peacefully.

Ethiopia has seen months of sometimes deadly protests calling for wider freedoms, while the government has been accused of killings, beatings and internet blockages.

The AU last week for the first time expressed concern about the recent unrest in its host country.