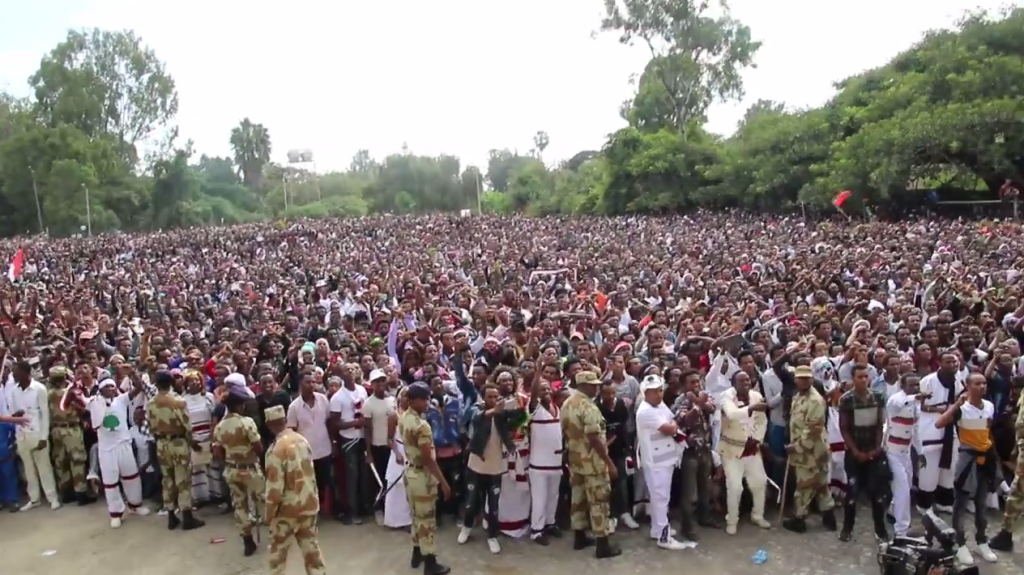 When our Observer Assif travelled to the town of Bishoftu, Ethiopia, to take part in the Ireecha festival held yearly by the Oromo ethnic group, he didn’t expect gunfire and blind panic. However, when Ethiopian security forces opened fire on the celebrating crowds, he found himself swept up in a deadly stampede that resulted in approximately 50 people losing their lives. This latest tragedy has inflamed tensions in the Oromo region, where a rebellion against the government has been ongoing for the past year.It’s hard to know how many people actually died on Sunday, October 2 in Bishoftu, a town located in the Oromia region south of the Ethiopian capital of Addis Ababa. The government reported that 52 people died, while the opposition say the number is closer to 100.Tens of thousands of people had gathered on the shores of Lake Harsadi to attend the Ireecha ceremony, which is a traditional Oromo festival marking the end to the rainy season. The Oromos represent the largest ethnic group in Ethiopia.

But the festivities were overshadowed by tensions between the Oromo people and the central government. Since November 2015, the region has seen frequent protests and subsequent government crackdowns. There have been large numbers of arbitrary arrests. At the root of the crisis is the government’s decision to implement an urban development plan that would encroach upon land belonging to the Oromo community.

Our Observer attended the festival. He told FRANCE 24 that the situation descended into violence when several participants crossed their arms in an X over their heads, a sign of Oromo solidarity. The gesture gained international recognition after Ethiopian athlete Feyisa Lilesa made the sign in protest as he crossed the finish line of the marathon at this year’s Olympics in Rio de Janeiro, Brazil.

Assif is our Observer’s pseudonym. France 24 has decided not to use his real name for his protection.

I went to Bishoftu to celebrate Ireecha, which I’ve been doing for the past ten years. But what I saw yesterday was unusual. Starting early in the morning, helicopters were circling overhead, keeping an eye on the crowd. The army had several armoured vehicles stationed around town. The atmosphere was heavy and oppressive.

The festivities had already begun when the crowd started protesting. They were unhappy with the fact that there were several Oromo officials who are affiliated with the government onstage. I think people felt as if they were using the festival as an excuse to spread pro-government propaganda. The crowd began to shout “Liberty, liberty and end to the TPLF regime!” [Editor’s note: The Tigrayan People’s Liberation Front is a political party based in Tigray, Ethiopia. It is mostly made up of Tigrayans, a minority ethnolinguistic group that makes up about 6% of the population of Ethiopia. The TPLF is the main partner of the Ethiopian People’s Democratic Front, the ruling coalition in Ethiopia].

A few participants crossed their arms over their heads [Editor’s note: According to other witnesses, the crowd also started throwing objects including rocks and bottles of water at the security forces.]

That’s when the festivities descended into violence. The army used its vehicles to block off all of the exits and started firing at the crowd. [Editor’s note: Our Observer wasn’t sure if they were firing live bullets or rubber bullets]. Though all the exits were blocked, people started pushing against each other in a panic. Some of us accidentally fell into ditches. The police started firing tear gas at that point and it went into the ditch. We were suffocating. I was stuck until I grabbed on to some tree roots and managed to pull myself out in order to breathe.

People were suffocating, others were crying for help. But no one could save them. A lot of people died.

Several videos published on social media confirm our Observer’s eyewitness account. The footage shows people trying to climb out of a deep ditch.

This incident was immediately labeled as a massacre by Oromo activists who blame the government for the tragic loss of life. Our Observer says it has provoked a new wave of tensions in the region.

In several different towns in the region, activists have organised new protests. [Editor’s note: On social media, the activists are calling for “five days of anger” in the region]. The situation is very tense.

Another Observer told France 24 that shops and schools in Bishoftu remain closed and that fear reigns over the population.

The government has declared three days of national mourning. However, it denies responsibility for the stampede. In a report published by the BBC, Prime Minister Hailemariam Desalegn claimed that rioters had caused “pre-planned mayhem”. Desalegn also denied that security forces had opened fire.

However, if the authorities did open fire, it wouldn’t be the first time. Human Rights Watch estimates that Ethiopian authorities have killed about 400 hundred people and arrested tens of thousands while repressing the Oromo movement