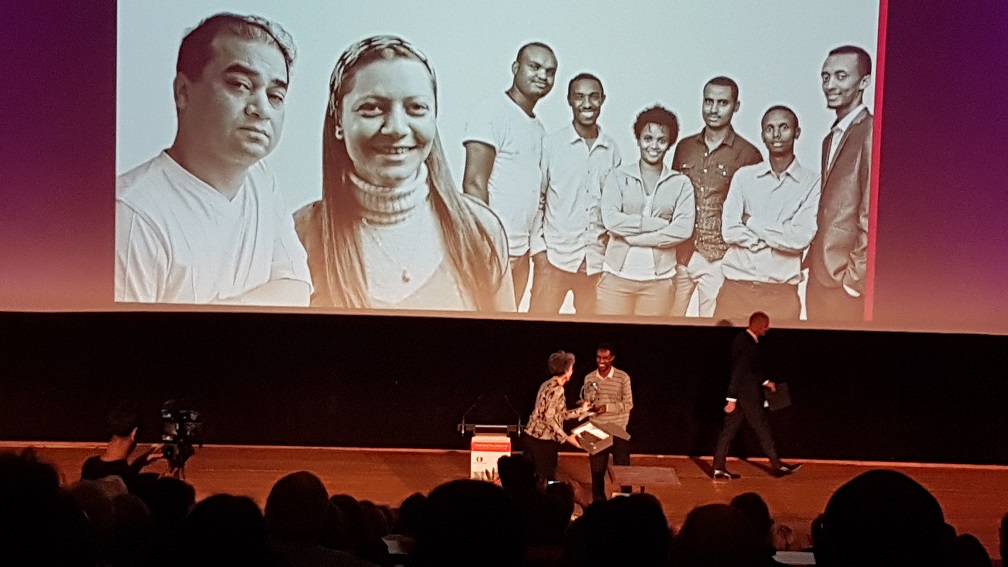 The ceremony was held at the University of Geneva .

Present at the ceremony, Zelalem Kibret received the awards on behalf of the Zone 9 bloggers on whom an unjust travel ban has been imposed by the Ethiopian authorities.

The Martin Ennals Award is given to Human Rights Defenders who have shown deep commitment and face great personal risk. The aim of the award is to provide protection through international recognition.

This year’s finalists included Razan Zaitouneh, a prominent human rights lawyer, activist, and journalist in Syria, lham Tohti is a renowned Uyghur public intellectual in the People’s Republic of China and Zone 9 Bloggers from Ethiopia.

Kality prison in Ethiopia, has 8 zones and holds many journalists and political prisoners. 9 young activists called themselves ‘Zone 9’ as a symbol for Ethiopia as a whole. They document human rights abuses and shed light on the situation of political prisoners in Ethiopia. Six of its members were arrested and charged with terrorism. Although they have now been released, three are in exile while four of the six remaining in in Ethiopia are still facing charges and are banned from travel.

The main award of the human rights movement. The Martin Ennals Award for Human Rights Defenders (MEA) is a unique collaboration among ten of the world’s leading human rights organizations to give protection to human rights defenders worldwide. The Jury is composed of the following NGOs:

More about the Martin Ennals Award for Human Rights Defenders