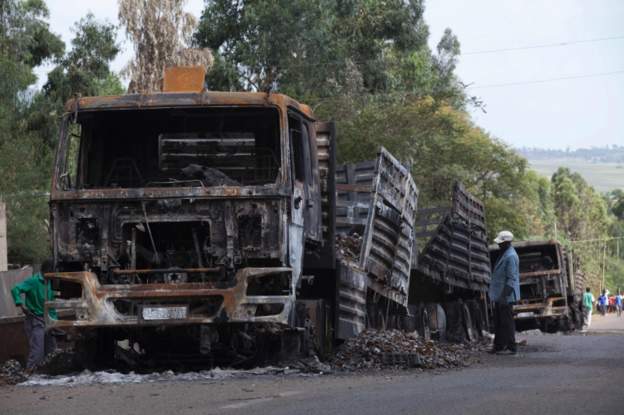 In Ethiopia, at least 1,000 suspects have been arrested over the violence in Sebeta town near the capital, Addis Ababa, the state-affiliated Fana Broadcasting Corporate has reported.

Only 40 to 50 suspects were natives of the town, while the majority were from other parts of Oromia region, the mayor, Ararsa Merdasa, is quoted as saying.

Ethiopia has declared a state of emergency to curb unrest in Oromia and Amhara, two regions that have seen a wave of anti-government protests since last year.

The mayor added that if there were any innocent people among the 1,000 suspects, they would be released once investigations were concluded.

Mr Ararsa said that residents had provided details of the rioters, including the crime they had committed, following public meetings.

More arrests were expected, he added.

Businessmen, who experienced massive losses after their properties were destroyed during the protests, are attending a “peace conference” in  Sebata, and called for better security, FBC reports.