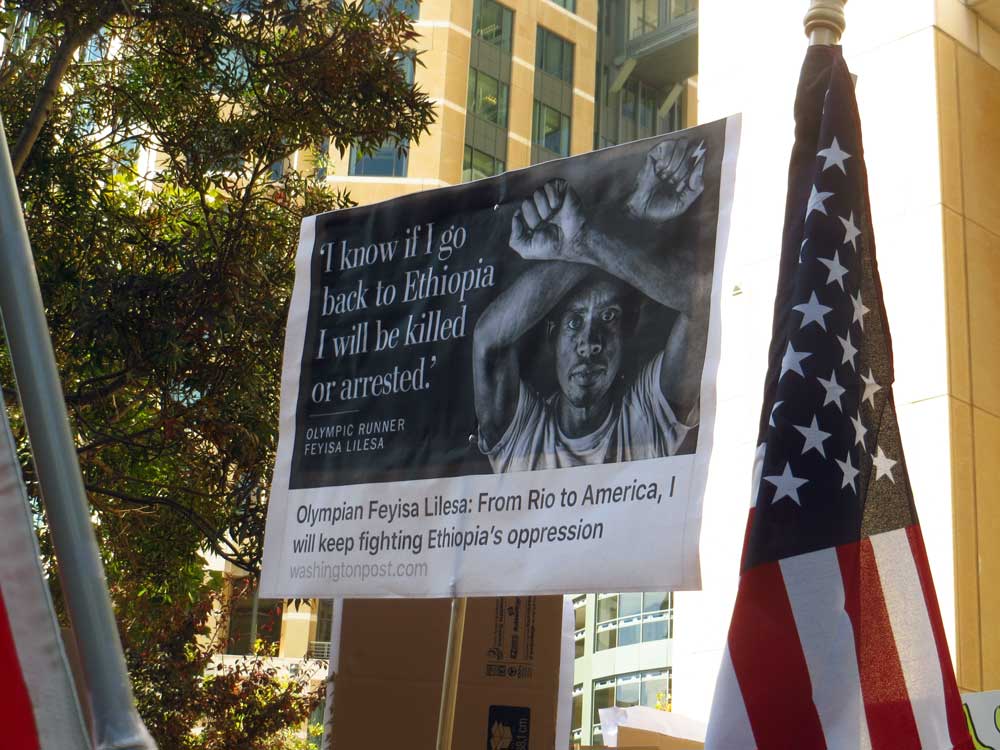 The government of Ethiopia has responded to a groundswell of protests, which are calling for democracy and human rights for all, by imposing a six-month long state of emergency, effective October 8.

The list of measures curtailing freedoms through the emergency are far-reaching. They include bans on: social media; accessing news outlets such as the US-based ESAT and Oromo Media Network; participating in or organizing protests without government authorization; making gestures, including the infamous crossing of arms above your head; and visiting government, agriculture or industry facilities between 6pm and 6am. With Addis Ababa as the seat of several international organizations including the African Union, foreign diplomats are now only allowed to travel within a 25 miles radius of the capital. Security forces have been given greater powers, including the ability to search people and homes without a court order and the authority to use force, while due process is suspended. Finally, opposition groups are barred from issuing statements to the press, and Ethiopians are not allowed to discuss issues that could “incite violence” with foreigners. This includes speaking to the media or providing information to international civil society groups such as the Oakland Institute.

These measures are appalling, especially given that a major cause of the protests was the prevailing lack of basic human rights, democracy, and freedoms of speech and assembly in the first place. Ethiopia has been under a de-facto state of emergency for a long time. These new draconian rules don’t address the situation in the country. Instead, they legalize and expand the authoritarian and repressive rule that the Ethiopian regime has maintained for years.

The international community must take swift action to denounce the state of emergency and the continuous repression of basic human rights in the country. If they do not, history will remember donor countries – including the US – as complicit, while hundreds have already been killed and thousands lie in jail for speaking out for democracy, human rights, and true development for all.

Ethiopia’s State of Emergency: Cracking Down on Basic Freedoms

The state of emergency in Ethiopia puts significant restrictions on basic freedoms of assembly and expression. But this is not new.

Numerous bloggers and journalists continue to suffer in Ethiopia’s prisons because of their vocal opposition to the government. On October 1, 2016, prominent blogger Seyoum Teshome was arrested after being quoted in a New York Times article about anti-government protests and announcing his plans to start a new blog. Seyoum is yet another addition to a long list in a country that is the third worst jailer of journalists in Africa.

Opposition parties have also experienced serious crackdowns on their ability to express themselves. Bekele Gerba, deputy chairman of one of the largest opposition parties, was arrested in August 2011 after meeting with Amnesty International. He was released prior to President Barak Obama’s visit to Ethiopia in July 2015, and re-arrested in December of the same year when protests started in Oromo. He continues to languish in jail.

Similarly, bans on social media and internet black outs are common, with numerous reports of internet shut downs this year.

This further crack down on social media and freedom of expression is an effort to shut out the international community, making it easier for the Ethiopian government to supress dissent. Repressing freedoms of expression and assembly have already created a highly volatile situation – these new measures will only worsen things.

Ruling with an Iron Fist

In early October 2016, Ethiopia’s Prime Minister admitted that 500 protesters had been killed by security forces in previous months, stating that the number of casualties was unimportant and threatening to deal with protesting groups forcefully. This declaration came a week after the Irreechaa tragedy, where between fifty-five and several hundred protesters were killed after security forces used tear gas, rubber bullets, and live ammunition on crowds at the country’s largest religious and cultural festival, triggering a stampede. It came a month after a fire in the Kilinto prison, which holds numerous political prisoners and anti-government protesters, left dozens of prisoners dead.  And it came two months after the Prime Minister threatened that his government would use “its full forces to bring the rule of law” to protesting regions.

With the state of emergency, the government legalizes and legitimizes a long tradition of ruling by force. It has already had a significant impact. Between October 17 and 20, over 2,600 people were arrested under the new laws. This number will undoubtedly increase in the days, weeks, and months to come.

Due Process: A Farce in Ethiopia

Due process has long been a farce in Ethiopia. The country’s draconian Anti-Terrorism Proclamation (ATP), adopted in 2009, has been used to arbitrarily detain and arrest students, bloggers, land rights defenders, indigenous leaders, opposition politicians, religious leaders, and more for exercising basic freedoms. The law violates international human rights law, as well as modern criminal justice and due process standards.

Amongst the thousands who have been unlawfully detained under the ATP are Pastor Omot Agwa and Okello Akway Ochalla.

Pastor Omot, a former interpreter for the World Bank Inspection Panel, was arrested in March 2015 while attempting to travel to a food security conference, organized by Bread for All, in Nairobi. He was charged as a terrorist under the claim that the meeting he was attending was a terrorist meeting. He has been in jail since then, and is still waiting for a trial.

Okello Akway Ochalla was illegally kidnapped in South Sudan and renditioned to Ethiopia. His charge is based on his vocal opposition to the Ethiopian government, and its role in a massacre of indigenous Anuak people in December 2003.  After two years of detention, during which Mr. Okello was forced to sign a false confession under duress, his sentence was lessened from terrorist to criminal charges. He was still given nine years in prison.

The suspension of due process under the state of emergency increases the likelihood of arbitrary detainments and unfair trials, two issues already endemic to Ethiopia and must be addressed immediately.

The Failure of the International Community

The mainstream media is finally waking up to the brutality of the Ethiopian regime. The Financial Times called this Ethiopia’s “Tiananmen Square moment.” Foreign governments are also taking notice, however, their statements remain very mild and fail to firmly condemn the violence and repression.

The US State Department declared that it was “troubled by the potential impact” of the state of emergency, reiterated its “longstanding call for the Government of Ethiopia to respect its citizens’ constitutionally-guaranteed freedoms,” and called for “peaceful dialogue” in the country. Statements by the United Nations, Canadian Minister of Foreign Affairs, andEuropean Union make similar calls for “inclusive dialogue” that are stunningly disconnected from the reality on the ground.

This toothless rhetoric fails to acknowledge the years of oppression and abuse that Ethiopians have faced under the current regime and that generated these protests. More importantly, it must be asked who can take part to the dialogue when so many political opponents and community leaders are in jail or in exile?

For years, the US, UK, and others have heralded Ethiopia as a blueprint for development, and provided massive financial support to their champion. But the model has failed. As our recent report shows, economic growth in Ethiopia has not lifted up the masses – it has happened alongside widespread hunger and poverty, forced displacements, and massive human rights abuses. This has led to the current tipping point, and tensions in the country are finally, understandably boiling over. The international community must recognize the failure of this model – and their role in it – and step in before more blood is shed.