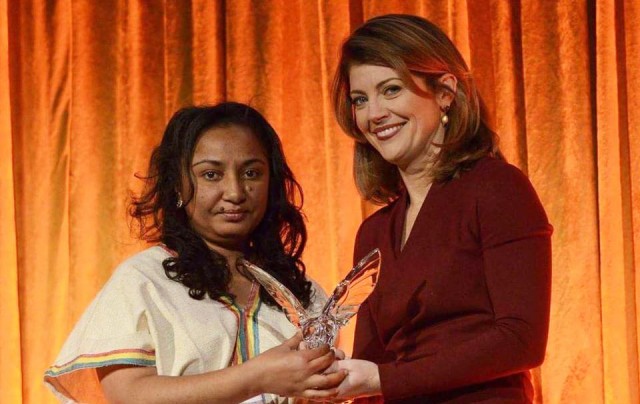 Ethiopian journalist Reeyot Alemu received her 2012 courage in journalism award at a ceremony in New York on Wednesday.

Every year, the International Women’s Media Foundation (IWMF) recognizes journalists for their extraordinary bravery, strength of character and pioneering spirit.

Reeyot was not able to receive her award in 2012 as she was imprisoned by the tyrannical regime in her country that does not allow free press and speech. She was imprisoned for over four years under trumped up charges of terrorism, a charge the regime uses to silence critical journalists and dissents.

She was released last year after serving four years of her 14 year sentence following uproar and condemnation by Ethiopians and the international community.

“Today, I am here with you as a free person, thanks in large to the unrelenting pressure from the Ethiopian people and the international community to secure my release,” Reeyot said on the occasion.

“We have never had the opportunity to present her with her award in person. And so today, it gives me enormous pleasure to present the 2012 Courage in Journalism Award – finally and in person – to a woman whose bravery and grace sets an example for all of us,” said Norah O’Donnell of CBS News, the host of the award introducing Reeyot.

“The invictus,” as her admirers call her, has undergone abuses by her tormentors and was rarely allowed medical attention for critical illnesses while in prison. The IWMF covered her medical expenses in New York which Reeyot is grateful about.

Reeyot now lives in exile in the United States and works for the Ethiopian Satellite Television and Radio (ESAT) in Washington, DC.

Diane Rehm, host of the Diane Rehm show which airs on WAMU 88.5 FM in Washington, D.C. and is distributed nationally by NPR since 1979, received a lifetime award.