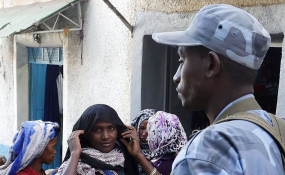 “Wako” fled Ethiopia for Kenya in 2012, after his release from prison. He had been locked up for two years after campaigning for the Oromo People’s Congress, an opposition party that has often been targeted by the government.

In Kenya, he hoped to be safe. But six months later Ethiopian officials kidnapped him in Nairobi and brought him to Ethiopia’s notorious Ziway prison, where he was mistreated and tortured, before being released. He fled to Kenya a second time.

When I spoke to him in Kenya, he said he planned to travel overland to South Africa. He hoped for better safety there.

Human Rights Watch has documented numerous cases of harassment and threats against Ethiopian asylum seekers in Kenya and elsewhere since 2010. In a recent letter to the Kenyan police, to which they have not responded, we describe how asylum seekers were assaulted, detained, and interrogated before Ethiopian officials in Nairobi, and forced to return to Ethiopia. Many also received threatening phone calls and text messages from Kenyan and Ethiopian phone numbers.

In private, some Kenyan police told us that Ethiopian Embassy officials in Nairobi have offered them cash to arrest Ethiopians. Ethiopian refugees said Ethiopian officials tried to recruit them to inform on others, promising land, protection, money, and resettlement to the US or elsewhere.

Threats to fleeing Ethiopians are not limited to Kenya. Community leaders, social media activists, opposition politicians, and refugee protection workers have been harassed in other countries. Human Rights Watch has documented abductions of Ethiopian refugees and asylum seekers from Uganda, Sudan, Djibouti, and elsewhere.

High-profile opposition figures with foreign citizenship have also been handed to Ethiopian authorities without a legal process, including a British citizen detained in Yemen, a Norwegian citizen in South Sudan, and a Somali national handed over last month by Somalia’s government.

In Somaliland, we recently spoke to 10 asylum seekers who were forced back to Ethiopia during one of the frequent roundups of Oromo in Somaliland. Eight said they were tortured upon their return to Ethiopia. Many described harassment from Ethiopian embassy officials and indifference from the UN refugee agency.

All this creates a climate of fear and mistrust amongst Ethiopian refugees, preventing them from living normal lives, going to working or even applying for asylum.

The UN refugee agency and host countries should work harder to ensure Ethiopians fleeing torture and persecution can safely access asylum processes and be safe from the long reach of Ethiopian officials.