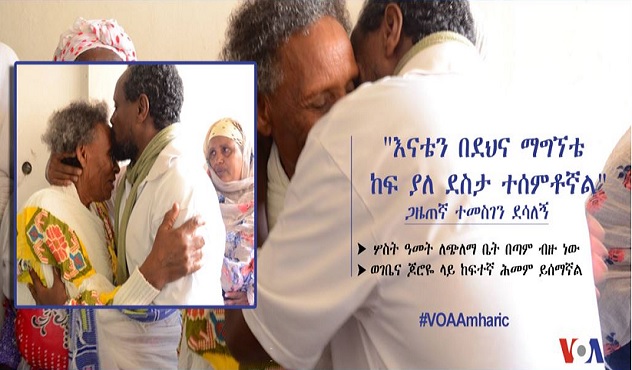 Journalist Temesgen Desalegne is released from prison after completing his prison terms. Prison authorities failed to honor his release date for days before they finally let him go this morning.

His brother and his friends went all the way to Ziway, a town south of Addis Ababa, to greet him as he leaves the notorious prison behind.

He was supposed to be released a year ago but the authorities denied him parole out of political motive as his release time coincided with the countrywide protest in 2016.

Temesgen Desalege has arrested some three years ago for allegedly inciting the youth for rebellion against the government and the “constitutional order.”

As well, he published books entitled “Yefera Yimeles” ( literally translates “let the scared one avoid going” ) which apparently angered the authorities to the point that security forces had to abuse book vendors who carry the book. He also collected the many articles he wrote over the years and published them under the title “Yemeles Amlko” (The cult of Meles)

In prison, he was beaten severely to the point that he got issues on lower back for which he was supposed to get medical attention but denied by the authorities.

He was also kept in solitary confinement and in the dark. Temesgen told VOA Amharic that he still feels pain on his ear and his back.

Temesgen Desalegne published a new booked entitled “Gize Lekulu” which was launched and entered the market a week before he was released.

Ethiopia is among countries that abuse journalists and a country where freedom of expression is restricted. There are still journalists in prison who are serving long prison terms. While their only crime is being a critical voice against the government, in most cases journalists are incriminated with trumped up “terrorism charges.” Bloggers like Eskinder Nega still languish in prison.