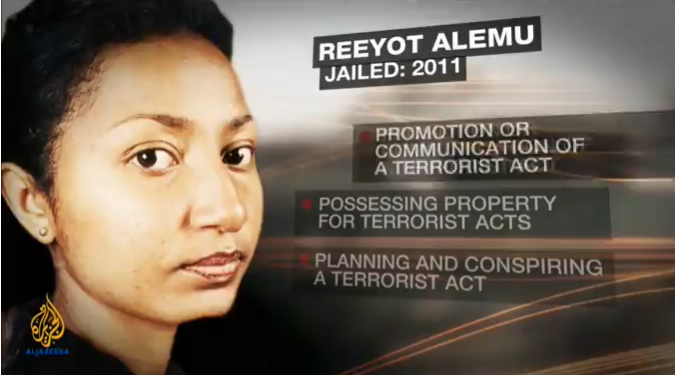 How the US ‘war on terror’ has provided cover for laws that are being used to silence dissident journalists.

When the Paris-based media watchdog group, Reporters Without Borders released its annual Press Freedom Index, few were surprised that Ethiopia had dropped 11 places to 137.

Journalists in the country have never truly been free to report however developments in the region over the last few years have had a detrimental effect on the media environment.

With the disputed 2005 general election, the continued conflict with separatist groups and the spectre of the Arab Spring arriving in the country – the government in Addis Abba has been cracking down on the media

And one of its most effective tools is a vague, far reaching anti-terrorism law that has sentenced at least 11 journalists to harsh prison terms.

Much of the reporting on Ethiopia these days is done at a safe distance. According to media watchdogs, 49 journalists fled the country between 2007 and 2012 to get away from a government that does not want to talk about this issue. The Listening Post made several interview requests but were denied.

The government did tell us that those in prison are there for their terrorist activities and not for being journalists. With convictions stacking up however, terrorism and critical journalism in Ethiopia are starting to look like one in the same.

Reeyot Alemu is one of those journalists – she has been sentenced to five years in jail. Foreign reporters have also been charged under anti-terrorism laws for daring to communicate with opposition groups. The Listening Post’s Nic Muirhead takes a closer look at journalism under Ethiopia’s anti-terrorism law.

“After all this persecution that the Ethiopian independent media has faced, most of us have been exiled, there is a significant portion of us in prison and the government has still not relented on its persecution, but still people write.”