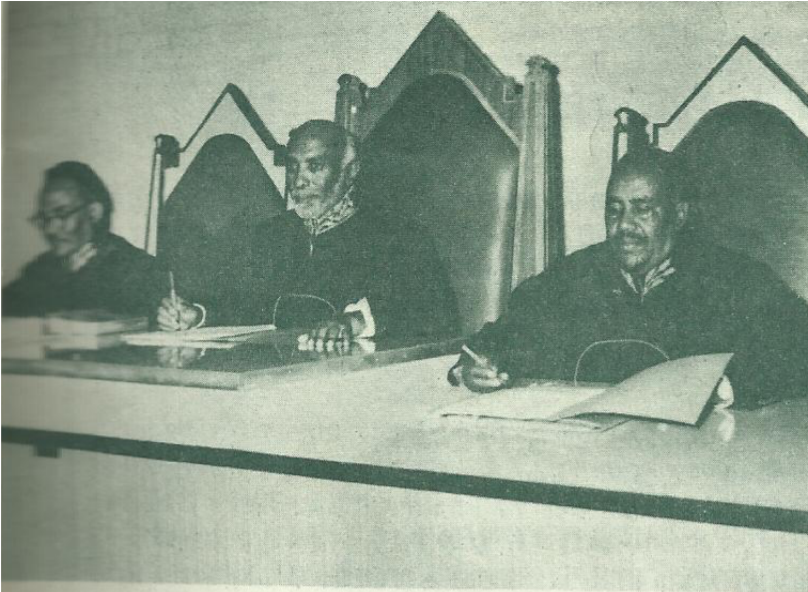 This book by Ayele Woubshet Ayele, great-grandson of Afenegus Kitaw Yetateku, is a compilation of the judgments made by the Imperial Supreme Court during Chief Justice Kitaw Yitateku’s tenure. By presenting 26 cases regarding inheritance, contract, labour and family law; this compilation aspires to outline the development of legal principles and jurisprudence in Ethiopia by chronologically presenting the following precedent setting cases during the years of 1964- 1969. As most books that present such compilations of selected judgments begin their study after the 1974 Ethiopian Revolution, this project aims to add to the works of Yohannes Hiruy by focusing on the time period that was outside the scope of his work.

The Honourable Chief Justice Kitaw Yetateku was born in the province of Shoa to his mother Woizero Hulum Yanchi Senu and his father Ato Yigletu Garedew. As most of his young contemporaries, his education began in the traditional education system of the country, where religious education and the study of the Amharic language took precedence. As such, his primary education took place in the local Michael church found in the 20 Ber Wereda area where he was born. However, what set him apart from his contemporaries is that after his primary education, he travelled to Addis Ababa to supplement his traditional education with the modern educational system that was beginning to take root. Studying at the prestigious Menelik II School, he partook in the study of the modern Sciences and Arts in a language very few people spoke at the time, French.

After finishing his formal education at the age of 18, Chief Justice Kitaw Yetateku began his professional career in law by working in the Special Courts found in the English and French embassies in Addis Ababa. By working for 18 years as the Chief Secretary and later as a Judge of these Special Courts, he was able to gain a unique insight and hands on education into the legal system operating in the country. However, his legal career was put on hold during the Italian occupation of 1936-1941, as he chose not to aid the Italian regime that seized power in any legal or personal capacity.

It was only after the liberation of the country that Chief Justice Kitaw commenced his work in the judicial system, working as a Criminal Court and High Court judge before working in the Ministry of Justice as Division President. All in all, Chief justice Kitaw held numerous posts in his professional life, serving as a High Court President for 19 years before serving as the President of the Supreme Imperial court (Afenegus), President of the Imperial Appeals Court, and also serving as a key advisor to the Minister of justice in the later stages of his career.

In an effort to modernize the legal system in Ethiopia, Chief Justice Kitaw also became a member of the Fetha Nagast Commission in 1956 and played a pivotal role in crafting what will later become the central legal pillars of the country, namely; the Civil Code, the Criminal Code and the Commercial Code. Along with this role, he along with other legal experts were crucial in guiding these legislative pillars through numerous parliament debates and succeeded in modernizing the legal system of the country by making these pillars the law of the land. Although some might see the passing of these laws as a successfully completed effort, Chief Justice Kitaw understood the need to further explain the dramatically new legal regimes being implemented in the country. To that effect, he continued his work in this area by publishing numerous newspaper and magazine articles along with publishing his own book in 1962 to further communicate the importance of these new regimes.

By playing such an important role in the inception as well as the expansion of Ethiopia’s modern legal system, Chief Justice Kitaw acquired an in-depth knowledge of the law that assisted him in not only resolving numerous complicated and trying cases in his career but also aided his ability to resolve them in a manner that was fair and balanced to all parties involved.

Chief Justice Kitaw was also a member of the Constitution Drafting Committee which was established on Megabit 13, 1966 (1973) with the aim of creating a new constitution that would 9 match the rapid development of the country and the new demands of the people. To that effect, on Yekatit 26,1966 (1973) Emperor Haile Selassie issued a press release on both radio and television in order to garner support for this initiative. He did so by elaborating on the work to be done by six of the Subcommittees under this initiative and established a six- month deadline for the completion of their work. As one of the members of this Drafting Committee, Chief Justice Kitaw worked diligently until Hamle 30, 1966 in the subcommittee that was tasked to reform the Judiciary. This Subcommittee’s main function was to enhance the quality of the Judiciary by enhancing its overall efficiency and establishing its independence from the Executive and Legislative branches of government. To that end, this Subcommittee proposed a number of reforms including-

Although the final draft was submitted to Prime Minister Lij Michael Emiru on Hamle 30, 1966 the reforms that were suggested by Chief Justice Kitaw and his peers fell on deaf ears after the Derg Regime seized power and parliament was disbarred on Meskerem 2, 1967 (1974).

Apart from the diligence he showed in his work, what also made Chief Justice Kitaw unique for his time was his interest in the legal systems of other countries and his in-depth knowledge of both their strengths and weaknesses. Obtained as a result of numerous academic studies as well as his practical experience when traveling to countries like India, Spain, Greece and Switzerland; this knowledge of foreign legal systems, conventions and experiences proved useful in his effort to effectively modernize the country’s legal system.

Alongside his responsibilities in the judicial and executive branches of government, Chief justice Kitaw tirelessly served as the Board President of the National Lottery Corporation, Board member of the Red Cross and Board member of St. Paul hospital. It is because of this level of dedication, determination and contribution to our society that Chief Justice Kitaw was able to obtain awards from the Ethiopian and Greek governments.

All in all, Chief Justice Kitaw worked diligently and tirelessly in the legal system for over 50 years, delivering a series of judgments that not only helped develop the jurisprudence of the country but also helped establish a standard for how an impartial and fair judge should act. To most people that encountered him in his professional life, what characterized his work was his in-depth knowledge of the law and his unique ability to strike a balance between a firm and compassionate judgment. It is this ability to consistently strike a fine balance and reach 10 an informed and impartial judgment that makes him an important person to study when discussing the development of Ethiopia’s jurisprudence.

This book is a compilation of the judgments made by the Imperial Supreme Court during Chief Justice Kitaw Yitateku’s tenure. By presenting 26 cases regarding inheritance, contract, labour and family law; this compilation aspires to outline the development of legal principles and jurisprudence in Ethiopia by chronologically presenting the following precedent setting cases during the years of 1964- 1969. As most books that present such compilations of selected judgments begin their study after the 1974 Ethiopian Revolution, this project aims to add to the works of Yohannes Hiruy by focusing on the time period that was outside the scope of his work.

The Title of Afenegus was considered to be the highest post in both the traditional and modern judicial systems of Ethiopia as it was a title given by the King to the most senior of judges. Directly translated as the “mouth of the king”, the Afenegus was the President and Chief Justice of the Imperial Supreme Court and was responsible for hearing appeals regarding legal interpretations and evidentiary discrepancies in both civil and criminal disputes. Historians such as Blaten Geta Mahteme Selassie and Fitawrari Gebre have noted the importance of this post in the judicial system and its inextricable ties with the monarchy by citing Emperor Menelik II’s personal involvement regarding who to appoint as Afenegus and determining what their discretion should be. To that end, this title was bestowed on very few judges that were able to show their legal knowledge as well as adjudicate in a fair and just manner. This rarity in appointments was noted by legal historian Abera Jembere in his book Ethiopian legal and judicial history: 1426-1966, as he listed a total of 17 justices who held this post in the years between 1900-1974.