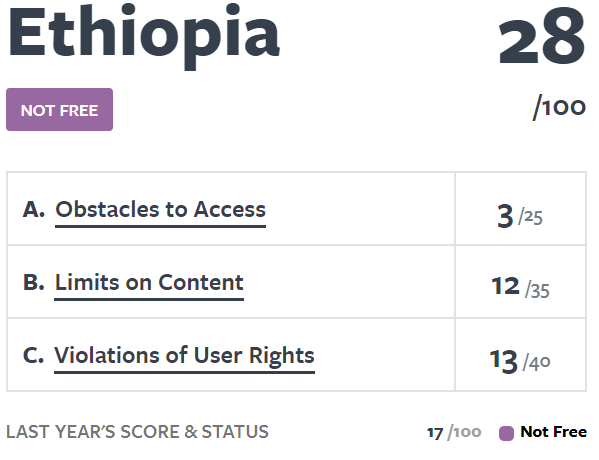 Ethiopia saw an 11 point improvement in its internet freedom score recording the biggest improvement this year.

The April 2018 appointment of Prime Minister Abiy Ahmed led to an ambitious reform agenda that loosened restrictions on the internet. Abiy’s government unblocked 260 websites, including many known to report on critical political issues.

CyberEthiopia.com was one of first blocked websites in the initial wave of censorship in 2006 and unblocked in 2018 after 12 years of restriction.

The 2019 Ethiopia’s Country report reveals that authorities also lifted a state of emergency imposed by the previous government, which eased legal restrictions on free expression, and reduced the number of people imprisoned for online activity. Although the government continued to impose network shutdowns, they were temporary and localized, unlike the nationwide shutdowns that had occurred in the past.

It is to be recalled that in the 2017 report, for the three consecutive years, Ethiopia was the third world’s worst abuser of internet freedom behind China and Syria.

Read the full 2019 Freedom on the Net Report