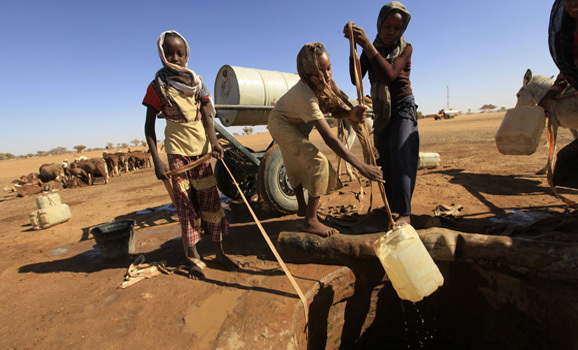 In the coming years, Egypt and Ethiopia may be forced to fight a “water war” because Ethiopia’s ambitions contradict Egypt’s historical and legal rights in the Nile waters. Ethiopia can only be deterred by the regional and international balance of powers, which in recent years has favored Ethiopia.

For any Egyptian government, Egypt’s water share and securing the Nile’s headwaters are the top national security priorities, irrespective of the Egyptian government’s ideology or domestic policies. This fact is dictated by geography. For thousands of years, Egyptian rulers have been aware how important water is for Egypt. Water is the lifeline of Egypt (97.5% of Egypt is barren desert). Egyptian rulers have always used any means to defend their country’s historic rights to the Nile waters. As Greek historian Herodotus said, “Egypt is the gift of the Nile.” Egyptian civilization, which is one of history’s greatest civilizations, depends on the Nile. To illustrate the Nile’s importance, we should remember that Egypt is the largest desert oasis in the world. Life in Egypt is concentrated on the river banks where 90 million people live. In short, any Egyptian government should have one eye on the Horn of Africa — on Ethiopia, where the source of the Nile lies — and another eye on the Sinai Peninsula and the Levant, and the balance of power there. History has shown that most of Egypt’s invaders entered through that door.

Egypt’s sentries against the country’s internal and external foes have been sleeping on the job. Their first eye failed to notice the developments at the Blue Nile’s source in Ethiopia (the Blue Nile constitutes 86% and the White Nile 14% of the Nile water volume. The two tributaries meet in Sudan before flowing to Egypt). Their second eye had lost the ability to distinguish friend from foe. Now, with the worsening economic crisis and the political deterioration between the ruling Muslim Brotherhood and the opposition, the balance of power is more and more tilting toward Ethiopia, which may unilaterally increase its water usage. That will affect Egypt’s historic rights of the Nile water and cause a serious threat.

In the report below, we will try to shed light on the Nile conflict and on why Ethiopia’s negotiating position toward Egypt has improved. We will end with a recommendation.

The conflict over the Nile waters

Egypt depends on the Nile River for 95% of its water needs for drinking, agriculture and electricity generation. The growing Egyptian population is increasingly dependent on Nile water. Egypt has historical rights to these waters under the Nile Water Agreement signed with Britain in 1929. It gave Egypt the right to veto any project in upstream countries affecting Egypt’s share of water flowing to it. It is worth mentioning that the 1929 agreement is binding for the three upstream countries — Tanzania, Kenya and Uganda — on the grounds that Britain, which colonized these countries, was their legal representative and could sign binding international agreements on their behalf.

The problem is compounded by the projected large population increase in the Nile basin. The UN projects that the population in the 11 basin states will reach 860 million people by 2050. This is pressuring both sides to try to improve their positions in the conflict over the Nile waters.

In May 2010, Ethiopia drafted the Entebbe Agreement to modify the historical and legal basis for the sharing of water. Most upstream countries supported the agreement but Egypt and Sudan refused it. It is true that the Entebbe Agreement is not legally binding for Egypt and Sudan, but it does show that Ethiopia is aware of the balance of power and its ambition to impose facts on the ground regarding the construction of dams, which will necessarily affect Egypt’s share in the Nile waters and thus represent an existential threat to Egypt. It is true that Ethiopia cannot force Cairo to sign, but the Entebbe Agreement shows that a major crisis between Cairo and Addis Ababa is on the way. What follows is an explanation of the Ethiopian diplomatic attack on Egypt and Sudan.

In recent years, the geopolitical framework has clearly shifted in Ethiopia’s favor, and it shifted the balance of power between Ethiopia and Egypt. The geopolitical changes that favor Ethiopia can be seen in six key indicators:

First, the disintegration of Somalia, Ethiopia’s traditional rival with which it fought a tough war over the Ogaden region, removed the geopolitical balance facing Ethiopia’s political ambitions in the region. Ethiopia exploited Somalia’s disintegration to strengthen its regional presence in the Horn of Africa. For years, Ethiopia has been “fighting terrorism” emerging from Somalia. Ethiopia has been doing that under an American umbrella from 2006 to 2009 and then again since 2011 until now.

The second indicator is represented by the partition of Sudan into two states: Sudan and South Sudan. That development has weakened Sudan (and thus Egypt) in the Horn of Africa and allowed Ethiopia to participate, since 2012, in the UN peacekeeping forces in the Abyei region, which is disputed between Sudan and South Sudan.

The third indicator is the following: the weakening of Sudan has shifted the balance of power in Ethiopia’s favor. The crisis in Darfur and the international isolation of the Sudanese president (an international arrest warrant was issued against him by the International Court of Justice in The Hague in 2009) has significantly limited Khartoum’s ability to maneuver in the Nile conflict.

The fourth indicator is the improved relationship between Ethiopia and the West in general, and between Ethiopia and the US in particular, after Addis Ababa emerged as a reliable partner in the Horn of Africa. Every year, Ethiopia gets $4 billion in military, development and food assistance. But the matter is not limited to direct aid. The West has started looking at Ethiopia differently in regard to development projects, such as the construction of dams in Ethiopia. The West had opposed such projects for decades because they were considered a threat to regional security.

The fifth indicator is about China. China is Ethiopia’s primary trade partner and Beijing has expressed willingness to finance a dam construction in Ethiopia and offered Chinese expertise in building large dams. China wishes to have a foothold in the region. There is oil in South Sudan and the Congo has mineral resources.

The sixth indicator is the weakening of Egypt’s political weight in the Horn of Africa. Egypt has no role in Somalia and was not even a key party in the negotiations between Sudan and South Sudan. Egypt’s preoccupation with internal matters is weakening its ability to confront regional and international players, such as China. Even though Egypt is the biggest market for Chinese goods among the 11 basin countries, China has favored other considerations over Egyptian priorities and Egypt’s rights in the Nile waters. So much so that China has offered its technological expertise in constructing dams, which is a complete disregard to Egyptian rights. What will Egypt do about all that? Only God knows.

In the coming years, Egypt and Ethiopia may be forced to fight a “water war” because Ethiopia’s ambitions contradict Egypt’s historical and legal rights in river waters. Ethiopia can only be deterred by the regional and international balance of powers, which in recent years has favored Ethiopia.

The government of Hisham Qandil (an irrigation expert, not a diplomat, legal expert or strategist) seems unable to manage such a complex issue with legal, political, economic, military and international aspects. His government is unable to solve everyday problems that are less complex, such as security, traffic, and fuel and food supplies. This portends dire consequences for Egypt.

What is needed is a way to manage the crisis and use Egyptian soft power toward Ethiopia, especially the Coptic Orthodox Church, which is the Ethiopian Church’s mother church. It is necessary to form a fixed Egyptian team to manage this highly sensitive issue. The team should go beyond party affiliation and include leading Egyptian Nile specialists. Ideological or religious affiliation should not be a factor in choosing that Egyptian crisis team. What is important should be the capabilities and competencies of the team members, who will come from the “clay” of the country, not from a particular group, party or political current. Clay, to those who don’t know, is what Egyptians call their country’s soil, which is a fertile soil resulting from the mixing with the Nile water.

Will Egyptian President Mohammed Morsi realize the seriousness of the situation and deal with that issue as a major national matter and quickly implement the required policies and procedures, or will he hesitate, as usual, and go down in history as someone who squandered the historic rights of Egypt and its future generations?