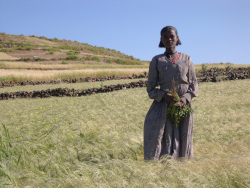 How Ethiopia Lost Control of Its Teff Genetic Resource

This report tells the story of an agreement on access to teff genetic resources in Ethiopia, and the fair and equitable sharing of benefits derived from their use, that was hailed as one of the most advanced of its time. This agreement between the Ethiopian Institute of Biodiversity Conservation and the Dutch company Health and Performance Food International was entered into in 2005. It was seen as a pilot case of the implementation the Convention on Biological Diversity in terms of access and benefit sharing, and expectations were high. And yet, implementation of the agreement failed. The Dutch company was declared bankrupt in 2009. And, as a result of several circumstances, Ethiopia was left with fewer possibilities for generating and sharing the benefits from the use of teff genetic resources than ever before. How was this possible? Exactly what happened, and what can we learn? How can we ensure that future access and benefit-sharing agreements will have better prospects of success? These are the central questions of this report, which provides an in-depth analysis of the course of events with regard to the agreement as well as a related patent on the processing of teff, and concludes by deriving recommendations concerning future access and benefit-sharing agreements as well as for the implementation of the Convention on Biological Diversity.