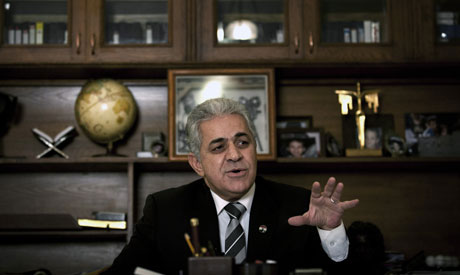 Egypt could close the Suez Canal to ships from countries that help Ethiopia build a controversial dam on the Blue Nile in the event that the dam threatens Egypt’s supply of Nile water, Egyptian Popular Current leader Hamdeen Sabbahi said Wednesday.

He went on to assert that Egypt was capable of prohibiting ships from those countries from transiting the Suez Canal “until they stop harming Egypt’s interests.”

He also said that Ethiopia’s decision to go ahead with the project – only days after President Mohamed Morsi’s state visit to the country – was “extremely humiliating to Egyptians.”

In comments reported by Al-Ahram Arabic news website, Sabbahi also called on Egyptians to support the government in its dispute with Ethiopia over the dam.

On Tuesday, Ethiopia began diverting the course of the Blue Nile, one of the Nile River’s two major tributaries, as part of its ‘Renaissance Dam’ project for electricity production, a move that raised concerns in Egypt and Sudan that the flow of water could be disrupted.

A final report on the impact of the planned dam by a joint committee of Egyptian, Sudanese and Ethiopian representatives is expected within days.

“We will not accept any pressure when it comes to our water supply,” Sabbahi said. “Solutions must be presented to avoid conflict.”

If Ethiopia continues with projects that harm Egypt, the nation will unite to deter an attack on its interests, he added.

Sabbahi said that while he fully supports Ethiopia’s right to increase its energy production, Egypt would not accept any reductions in its annual water supply.

If matters escalate, he said, a drop of water would exceed a drop of blood in value. The best way to avoid conflict is to open new initiatives for strategic cooperation in the Nile Basin, he added.

Egypt’s ambassador in Addis Ababa, Mohamed Idris, said Ethiopia’s intention to divert the Blue Nile had been known since November 2012.

According to the state-run National Planning Institute, Egypt will require an additional 21 billion cubic metres of water per year by 2050 – on top of its current annual quota of 55 billion metres – to meet the needs of a projected population of some 150 million.

Correction: Ahram Online had earlier quoted Sabbahi as saying that Egypt was capable of barring Ethiopian ships from crossing the Suez Canal. This is incorrect. Rather, he said that ships from those countries that financed the dam project could be prohibited from transiting the canal.