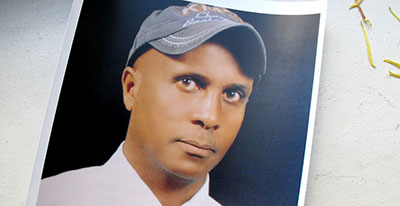 An Ethiopian journalist who was jailed after publishing a series of articles calling for democratic reforms has penned a letter from prison, seen exclusively by The Independent, in which he decries the “human rights crisis” unfolding in Ethiopia and describes the personal toll of facing 18 years behind bars.

The call to action: You can help Eskinder’s case. Please share these stories, his journalism, and his prison letter, as widely as you can through social media. Wherever you are in the world, please raise his case with your elected officials and governmental foreign ministers.

Eskinder Nega, 45, was sentenced last year under a broad 2009 anti-terrorism law which freedom of speech activists, the United Nations and various members of the US congress and European Parliament say effectively ban independent journalism in Ethiopia. At trial, Mr Nega admitted he had criticised the government, but said he had only ever called for peaceful steps towards democratic reforms.

A copy of Mr Nega’s letter, smuggled out of his cell in Addis Ababa’s notorious Kality Prison, was passed to The Independent for publication as part of its Voices in Danger campaign, which is aimed at publicising the plight of jailed, attacked or harassed reporters around the world.

Under the headline “I shall persevere!”, Mr Nega’s letter is a reaction to a ruling handed down by the Ethiopian Supreme Court on 3 May, which rejected his appeal and upheld his 18-year jail sentence. In it, Mr Nega vows to continue his fight for freedom of speech in Ethiopia.

“Individuals can be penalised, made to suffer (oh, how I miss my child) and even killed,” he writes. “But democracy is a destiny of humanity which cannot be averted. It can be delayed but not defeated.”

Mr Nega quotes widely from literary figures such as Keats and Horace in his assessment of Ethiopia’s government, citing Alexander Solzhenitsyn’s analysis of the Stalinist purges of the 1930s, which “tortured you not to force you to reveal a secret, but to collude with you in a fiction.” He writes: “This is also the basic rational of the unfolding human rights crisis in Ethiopia.”

Ethiopia is courted by western governments including Britain, partly because it is seen as a relatively stable nation in the Horn of Africa. But critics say that behind this reputation lies one of the continent’s most repressive regimes when it comes to free journalism.

At least 72 publications, including those for whom Mr Nega worked, have been forced to close under government pressure over the last two decades, according to the Committee to Protect Journalists.

Educated in the US, Mr Nega has been imprisoned nine times for his journalism. His wife, Serkalem Fasil, was also jailed at one stage for her activities as a newspaper publisher and even gave birth to their son in prison. She once described jail as “a home away from home” for her husband.

In his prison cell letter, he concludes: “I sleep in peace, even if only in the company of lice, behind bars,” he writes in his letter from jail. “The same could not be said of my incarcerators though they sleep in warm beds, next to their wives, in their homes.”

Mr Nega’s calls for freedom of speech echo those voiced on Sunday, when around 10,000 Ethiopians marched through the capital of Addis Ababa in the first large-scale anti-government protests since the disputed 2005 election which ended in street violence that killed 200 people.

After Mr Nega and his wife published columns criticising what they described as the government’s brutal crackdown on those2005 protests, they were both arrested and charged with treason. They were both acquitted after 17 months in jail, where Serkalem gave birth to their son, Nafkot.

Speaking after Sunday’s march, Yilekal Getachew, chairman of the Semayawi (Blue) party, which organised the protests, said: “We have repeatedly asked the government to release political leaders, journalists and those who asked the government not to intervene in religious affairs.”

Journalists are not terrorists

Of the 11 journalists convicted, three are currently jailed (Eskinder, Woubshet Taye and Reeyot Alemu). A further two, Yusuf Getachew and Solomon Kebede, were arrested in 2012 – both are awaiting trial on terror accusations.

The new laws were brought in after Ethiopia became a key regional security partner of of America’s so-called ‘war on terror’.

While the government claims the laws are necessary to maintain stability, critics say they confuse the actions of a free press with terrorism.

Ethiopia has the highest number of exiled journalists in the world, the CPJ claims. Against a backdrop of increasing pressure from the authorities, between 2007 and 2012, 49 journalists fled the country. According to the CPJ, there are currently seven journalists in jail in Ethiopia, some without charge. In Africa, only Eritrea jails more.

Ethiopia’s government says all the journalists currently in jail are there due to their terrorist activities. It says Mr Nega is in jail for writing “articles that incited the public to bring the North African and Arab uprisings to Ethiopia.”

In contrast, a recent ruling by a panel of five independent United Nations experts said Mr Nega’s imprisonment came “as a result of his peaceful exercise of the right to freedom of expression”. The US state department’s latest human rights reports described the trials of Mr Nega and other journalists and dissidents as “politically motivated.”

Throughout his career, Mr Nega has refused to be exiled or silenced, even publishing critical pieces about the government right up until the days before his trial last year.

His last article, published on 9 September 2011, five days before his arrest, came in response to the arrest of dissident actor Debebe Eshetu, and discussed how improbable it was that those who were being jailed under the new laws were really “terrorists”.

Eskinder Nega’s letter: I will live to see the light at the end of the tunnel

I shall persevere! ‘So I may do the deed that my own soul has to itself decreed’ – Keats.

Individuals can be penalised, made to suffer (oh, how I miss my child) and even killed. But democracy is a destiny of humanity which can not be averted. It can be delayed but not defeated.

No less significant, absent trials and tribulations, democracy would be devoid of the soul that endows it with character and vitality. I accept my fate, even embrace it as serendipitous.

I sleep in peace, even if only in the company of lice, behind bars. The same could not be said of my incarcerators, though – they sleep in warm beds, next to their wives, in their homes.

The government has been able to lie in a court of law effortlessly as a function of the moral paucity of our politics. All the great crimes of history, lest we forget, have their genesis in the moral wilderness of their times. The mundane details of the case offer nothing substantive but what Christopher Hitchens once described as “a vortex of irrationality and nastiness”. Suffice to say that this is Ethiopia’s Dreyfus affair. Only this time, the despondency of withering tyranny, not smutty bigotry, is at play.

Martin Amis wrote, quoting Alexander Solzhenitsyn, that Stalinism (in the 1930s) tortured you not to force you to reveal a secret, but to collude in a fiction.

This is also the basic rationale of the unfolding human rights crisis in Ethiopia. And the same 1930s bravado that show-trials can somehow vindicate banal injustice pervades official thinking.

Wont to unlearn from history, we aptly repeat even its most brazen mistakes.

Why should the rest of the world care? Horace said it best: Mutato nomine de te fabula narratur. (Change only the name and this story is also about you). Where ever justice suffers, our common humanity suffers, too.

I will live to see the light at the end of the tunnel. It may or may not be a long wait. Whichever way events may go, I shall persevere!

Written by Eskinder Nega from Kaliti Prison in Addis Ababa

Africa’s oldest independent nation is also its second-most populated, and boasts one of the fastest-growing economies on the continent. It has long been seen by the West as a bulwark against radical Islamists in neighbouring Somalia, and is seen as one of the most stable countries in the Horn of Africa.

However, its government, led by the Prime Minister Hailemariam Desalegn, who was sworn in last September following the death of long-term leader Meles Zenawi, is also frequently criticised by human rights groups for cracking down on opposition and the media on the grounds of protecting national security. The country’s 547-seat legislature only has one opposition member.

Anti-terrorism legislation passed in 2009 has meant anyone who is caught publishing information that could induce readers into “acts of terrorism” are liable to jail terms of up to 20 years.

In addition to tightening its grip on the opposition and media, the government has also been accused of meddling in the day-to-day religious affairs of Ethiopians.

Muslims, who comprise about a third of Ethiopia’s 86.5 million people, have staged protests against the government, including mosque sit-ins in 2012, to call for some jailed religious leaders to be freed. The majority of Ethiopia’s population is Christian.

Ethiopia denies interfering in religious affairs, but also says it fears militant Islam is taking root in the country.