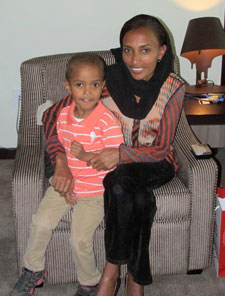 “When I grow up will I go to jail like my dad?” This was the shattering question that the five-year-old son of imprisoned Ethiopian journalist Woubshet Taye asked his mother after a recent prison visit. Woubshet’s son, named Fiteh (meaning “justice”), has accompanied his mother on a wayward tour of various prisons since his father was arrested in June 2011.

Authorities have inexplicably transferred Woubshet, the former deputy editor of the independent weekly Awramba Times, to a number of prisons. From Maekelawi Prison, authorities transferred him to Kality Prison in the capital, Addis Ababa, then to remote Ziway Prison, then Kilinto Prison (just outside Addis Ababa), back to Kality, and in December last year–to Ziway again.

It is at Ziway, an isolated facility roughly 83 miles southeast of the capital, where heat, dust, and contaminated water have likely led to a severe kidney infection in Woubshet. The award-winning journalist was meant to receive medical treatment while at Kality Prison in Addis Ababa, Woubshet’s wife, Berhane Tesfaye, told me, but it never took place. Suffering in such pain in his ribs and hip that he cannot sleep, Woubshet has not even received painkillers, according to local journalists who visited him.

Despite high transport costs and more than four hours of travel each way, Berhane and Fiteh try to visit Woubshet every week. Fiteh routinely becomes ill from the dust, Berhane said, and prison guards prevent Woubshet from hugging his son. Prison visits are often brief and canned, local journalists told me, as even discussions over Woubshet’s health are restricted by guards assigned to monitor the conversation.

What terrible misdeeds could have triggered such a fate? Authorities sentenced Woubshet to 14 years in prison on charges lodged under Ethiopia’s broad anti-terrorism law. The evidence includes email exchanges he had with Elias Kifle, exiled Ethiopian editor of the Washington-based opposition website Ethiopian Review, Berhane said. An email to Woubshet’s brother in America was also cited as evidence against him, she said. After Woubshet’s brother asked about their ailing father’s eye operation, his reply that “the operation was done successfully” was used as an example of his terrorist activities.

Local journalists suspect the real reason lies in Woubshet’s critical reporting at Awramba Times. Two weeks prior to his arrest, Woubshet published a column critical of the ruling party’s performance in its two decades of rule. Another column, written in 2009, that questioned the whereabouts of former opposition party members after the 2005 elections may have also triggered his arrest, Berhane said.

While debates over the reasons for Woubshet’s arrest may persist, there is one point on which all sides should agree: Woubshet must be allowed access to medical treatment. Ethiopia is a signatory to the African Charter on Human and People’s Rights, the International Covenant on Civil and Political Rights, and the International Covenant on Economic, Social and Cultural Rights, and thus duty-bound to ensure the health of its citizens as a fundamental human right.