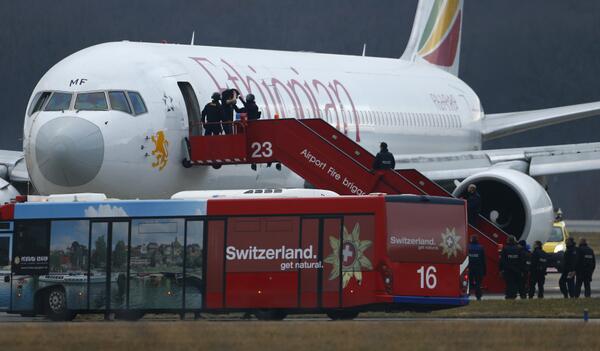 ADDIS ABABA, Ethiopia – Airline passengers en route to Italy were rerouted to Switzerland on Monday morning in a peaceful but puzzling hijacking episode, carried out by the plane’s own co-pilot.

Ethiopian Airlines flight ET702 was headed from Ethiopia’s capital city of Addis Ababa to Rome when the captain took a bathroom break. The first officer then locked himself inside the cockpit, reported the hijacking to airport transponders, and aimed his Boeing 767 toward Geneva. Reports indicate that the passengers were blissfully unaware of the situation until they touched down. They were heavily searched upon exiting the aircraft, after which the airline began efforts to get all 193 passengers – mostly Italian nationals – to their final destinations.

The unarmed hijacker’s own fate is unclear. Hailemedhin Abera Tegegn, 31, is an Ethiopian national who has worked for Ethiopian Airlines for five years. After landing safely around 6 a.m. local time, he disembarked from the aircraft through the cockpit window and handed himself over to the Swiss police, in whose custody he remains. The hijacker could face a prison sentence of up to 20 years on charges of hostage-taking.

Geneva police told reporters that Hailemedhin was requesting asylum in Geneva for fear of persecution in his native country, but the Ethiopian government released a statement saying that such action “flies in the face of Article 32 of the Ethiopian constitution, which guarantees the freedom of any citizen to leave the country at any time.”

A recording of the radio communications between Hailemedhin and officials at the Geneva airport was published by Matthew Keys (@matthewkeyslive) shortly after the incident. The sound byte has Hailemedhin trying to ensure a favorable reception in Switzerland before landing. “We are still waiting for asylum; you said you were going to give,” he says, while his interlocutor on the ground protests that he is unable to make that decision. The two calmly exchange updates on altitude and wind direction before the plane finally touches down. “I will be coming out via the window,” Hailemedhin radios from the tarmac, and the airport official responds with a hesitant “Roger.”

Speculations abound regarding what might have prompted the copilot to attempt such a brazen escape. Hailemehdin is not unique in seeking to exit his home country; the latest data from UNHCR found that in the first half of 2013, nearly 42,000 people sought asylum from Ethiopia. This could have something to do with with fear of persecution; Ethiopian security forces have been criticized for committing human rights abuses against anti-government activists and religious or ethnic minorities. Poverty is another issue, with at least one-fourth of the population living below the poverty line.

But Ethiopia is also on of the world’s top 10 recipients of asylum applications from other countries. The country is pursuing ambitious developmental goals, can boast stability in a volatile region, and is home to one of Africa’s fastest-growing economies. Hailemedhin himself was a member of Ethiopia’s expanding middle class; he was well-educated and gainfully employed. Furthermore, he appears to have no criminal history. “There was no reason for him to be prosecuted, so there is no reason for him to flee,” said government spokesman Redwan Hussein on Monday.

More insights into the hijacker’s past came from a Twitter user who claims to be Hailemedhin’s sister, who released the above photo of the hijacker. She says her younger brother goes by the nickname Tadlo, and she suspects he hijacked the flight under duress since he loved Ethiopia and abandoned a potential career in architecture in order to work for the state-owned airline.

“The co pilot is my youngest brother. We call him Tadlo. He loves working for Ethiopian Airlines. There must be more to the story

She added that family was “in shock” was unable to immediately contact the hijacker.

Ethiopian Airlines, one of Africa’s safest and most successful carriers, said in a press release that “the cause of the diversion of the flight is under investigation, adding that the company “wishes to apologize to its esteemed customers for the inconvenience caused by this diversion.”

The Ethiopian government was a bit more scathing, calling Hailemehdin’s actions a “gross betrayal of trust.” As the investigations unfold, authorities say they have no idea what prompted Hailemehdin’s desperate bid for escape. “Any political, social or economic reason would not make sense to hijack your own plane and be a criminal,” said Redwan. “Until we hear from him, there is nothing that we can comment on.”