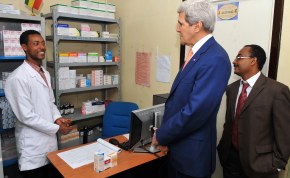 AFP, Thursday 1 May 2014 — US Secretary of State John Kerry urged Ethiopia on Thursday to allow greater freedoms for civil society and journalists, expressing concern for a group of bloggers and journalists arrested last week.
“They need to create greater opportunities for citizens to be able to engage with their fellow citizens and with their government by opening up more space for civil society,” Kerry told reporters.

Rights group accuse Ethiopia of having one of the most closed press environments in the world.

“I am raising a very legitimate concern, we are concerned about any imprisoned journalist here or anywhere else,” Kerry added, following a meeting with Ethiopian Prime Minister Hailemariam Desalegn.

Washington is one of Ethiopia’s largest donors, and Kerry urged Addis Ababa to support a free press as an essential precursor to a legitimate democracy.

“The work of journalists, whether it’s print journalism or the Internet or media of other kinds, makes societies stronger, makes them more vibrant and ultimately provides greater stability and greater voice to democracy,” he said.

Nine people were arrested last week on charges of “serious criminal activities”. Rights groups said they were journalists and bloggers targeted in a sweeping crackdown against free speech.

Ethiopia has been accused of cracking down on independent media and has doled out several heavy sentences for journalists charged under controversial anti-terror legislation.

“We shouldn’t use the anti-terrorism proclamation as mechanisms to be able to curb the free exchange of ideas,” said Kerry.

The secretary of state is in Ethiopia as part of his first major Africa tour, aimed at addressing bloody conflicts in several troubled countries including South Sudan and Democratic Republic of Congo.

Kerry is due to travel on to DR Congo and Angola on his Africa trip, which runs until May 5.